A week after President Donald Trump said at a rally in Nashville that Phil Bredesen is “an absolute total tool” of Chuck Schumer and Nancy Pelosi, the Democrat candidate for the U.S. Senate and former governor of Tennessee provided compelling evidence to confirm the truth of the president’s statement.

“Phil Bredesen will do everything he can to disguise and deny his liberal Democratic Party connections but the truth will become increasingly apparent as the campaign moves towards November,” Tennessee Star Political Editor Steve Gill noted.

“Ultimately Tennessee voters will discover that ideologically he is Hillary Clinton without the pantsuits,” Gill added.

Among the sponsors who are contributing $5,000 each to the Bredesen campaign are lobbyists Heather Podesta, ex-wife of fallen Democratic lobbying king pin Tony Podesta, leader of the pro-abortion Center for Reproductive Rights and former sister-in-law of Hillary Clinton’s campaign manager and Bill Clinton’s former chief of staff John Podesta, Steve Elmendorf, and Jillian Fitzpatrick.

Heather Podesta is closely tied to Hillary Clinton, as is Bredesen, who donated more than $46,000 in support of her failed 2016 Presidential campaign.

According to Politico Playbook, Podesta circulated an email to her friends inviting them to the evening “Conversation with Hillary” event, which will take place on July 30 at her home in the nation’s capital.

“I’ve got exciting news — Hillary Clinton will be at my house in Washington … for an event on Thursday, July 30, from 5:00 – 7:00 p.m. More details are on the invite,” Podesta wrote in the message.

In addition to Podesta and Elmendorf, at least two of the  five other co-sponsors of the Washington, D.C. fundraiser for Bredesen, each of whom are contributing $5,000 to the Bredesen U.S. Senate campaign, are also well connected Washington power brokers.

Jillian Fitzpatrick is a director with S & P Global and was policy director for Sen. Tim Kaine (D-VA) before he became Hillary Clinton’s running mate in 2016.

Jason Gold is a vice president with S & P Global and a former senior fellow and director of the Progressive Policy Institute. 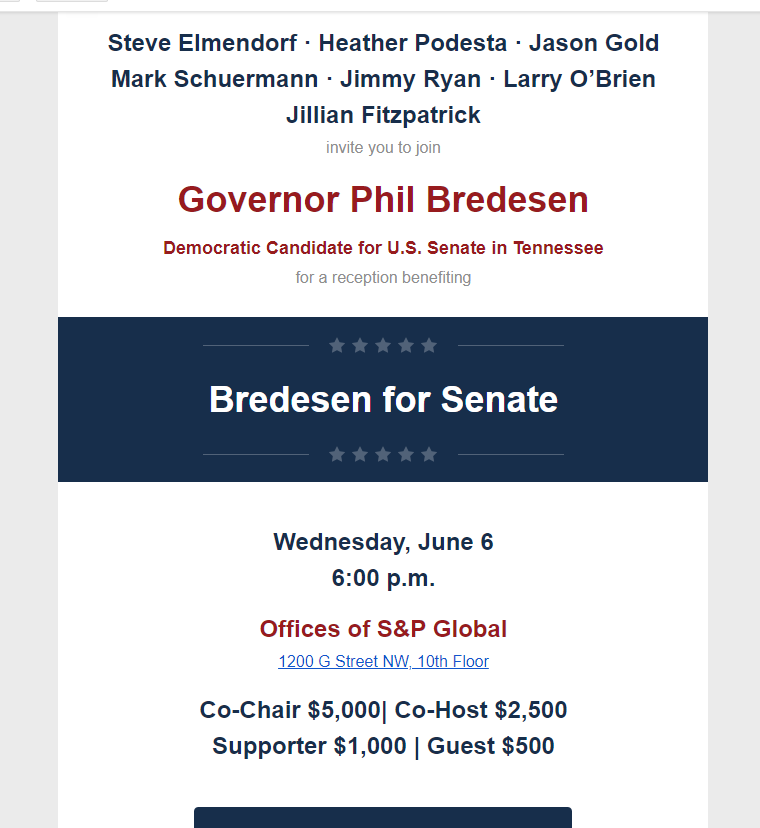 This is not the first time Bredesen has traveled to the urban centers of far left anti-Trump activism to raise money for his Tennessee U.S. Senate campaign, nor will it be the last.

In April, Bredesen went to New York City–the borough of Manhattan to be precise–where Sen. Chuck Schumer (D-NY) held an exclusive fundraiser for him.

“Former Gov. Phil Bredesen, the 74-year-old “new hope” for Democrats in Tennessee who is running unopposed for his party’s U.S. Senate nomination, launched a television ad last week in which he said “I’m not running against Donald Trump. Despite that claim, Bredesen is headed to a high end restaurant near New York City’s Central Park in Manhattan to raise big money from Never Trump liberals who want to destroy Trump’s presidency and the GOP,” The Tennessee Star reported at the time.