Staffers and allies of President Donald Trump face a new normal in today’s heated political environment: the potential for harassment and protests anywhere they show their faces — both in their public and private lives.

“Already you have members of your cabinet that are being booed out of restaurants,” We have protesters taking up at their house who are saying, ‘No peace, no sleep. No peace, no sleep,’” Waters told a liberal crowd on Saturday, pledging to “win this battle.”

“If you see anybody from that cabinet in a restaurant, in department store, at a gasoline station, you get out and you create a crowd,” the congresswoman added. “And you push back on them. Tell them they’re not welcome any more, anywhere!”

What Waters is advocating is already happening.

CREDO Action, a progressive grassroots organization, organized a protest outside Nielsen’s home on Friday — three days after she was hounded from the Mexican restaurant.

The activists played audio of crying immigrant children outside Nielsen’s home and chanted “No justice, no sleep!” They continued shouting at the DHS secretary as she walked from her home to her car, Fox News reported.

Florida Attorney General Pam Bondi, a Trump ally, received her own hostile reception on Saturday when she attended a documentary on children’s TV host Mr. Rogers.

Protesters chased Bondi out of the theater, yelling, “shame on you!” and “you’re a horrible person!”

Members of Antifa, a far-left anarchist movement that DHS has labeled “domestic terrorists,” further circulated the list of ICE employees, accusing them of being “Nazis.” 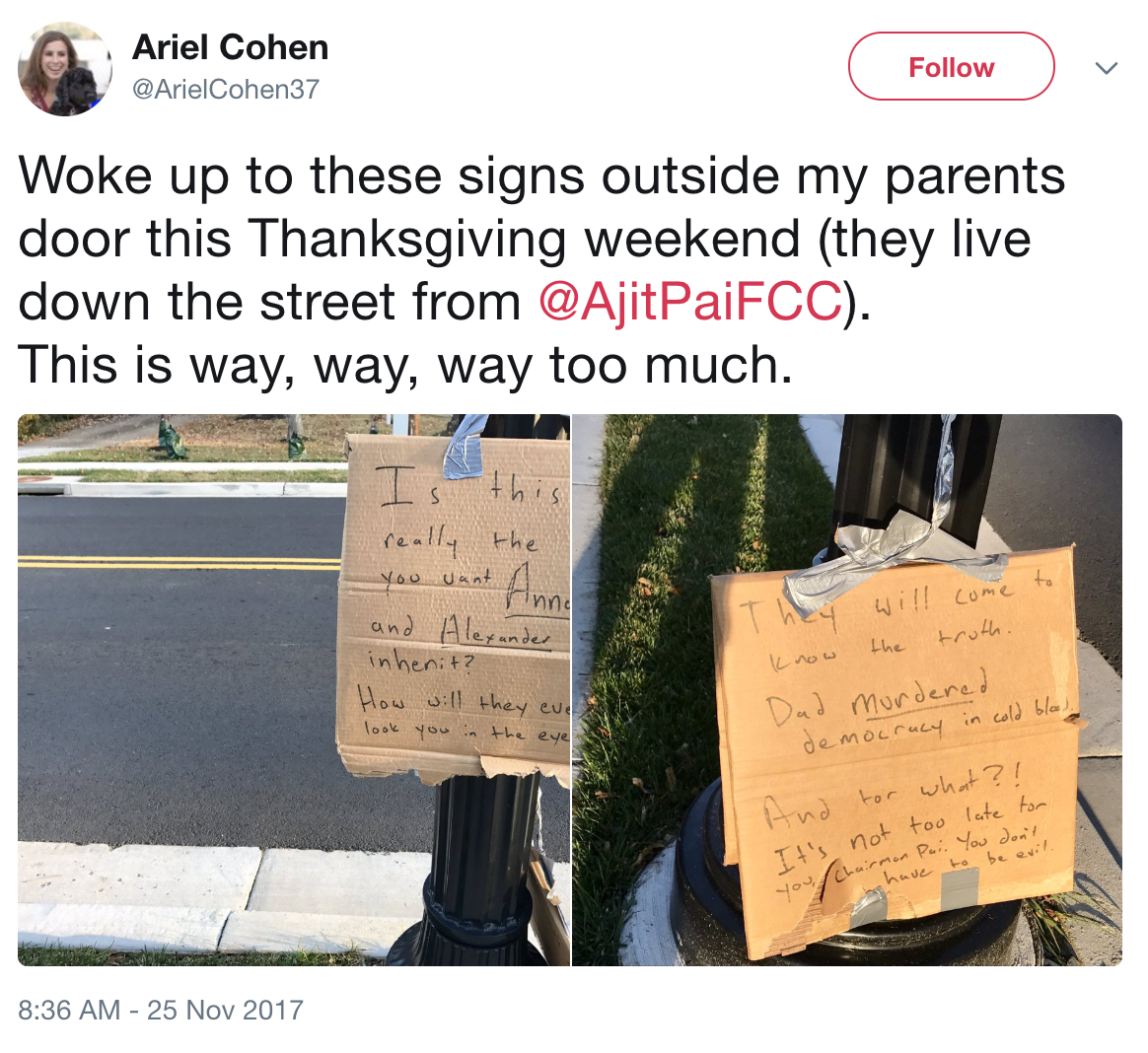 Federal Communications Commission Chairman Ajit Pai issued a plea for civility in November 2017 after activists, upset with the FCC’s rollback of the Obama-era Net Neutrality rule, left signs outside of his house with his children’s names on them.

“They will come to know the truth. Dad murdered democracy in cold blood,” one sign read, informing Pai that it was “not too late” for him to change his mind about Net Neutrality.

“I understand that people are passionate about policy, but the one thing in America that should remain sacred is that families, wives and kids, should remain out of it,” Pai said at the time. “And stop harassing us at our homes.”

The signs targeting Pai’s kids didn’t mark the first time that activists had showed up outside his home.

A month after Pai’s call for civility, he was forced to cut short a speech due to a bomb threat.

Liberal activists in June 2017 took their protests to the homes of two Republican senators: Rob Portman of Ohio and John Boozman of Arkansas. The doorstep protests were meant to influence the senators’ votes on healthcare legislation.

Left-wing hostility to Republicans in the Trump era has repeatedly extended beyond protests and harassment to threats and acts of violence.

If not for Scalise’s security detail, Hodgkinson may have succeeded in his mass assassination attempt. The would-be assassin was “fueled by rage against Republican legislators,” a state’s attorney concluded after an investigation.

Scalise’s office pushed back against Waters’ calls for harassment on Sunday.

“We are lucky to live in a country where we have the right to freely debate our differences civilly. Harassment is never an acceptable method of disagreement.”

In May 2017, Tennessee police officers arrested a liberal woman after she allegedly tried to run GOP Rep. David Kustoff off the road after a town hall on healthcare legislation.

A popular parade in Portland, Oregon was cancelled in April 2017 after threats of violence against one of the groups participating — a local Republican organization.

In February 2017, 71-year-old female staffer for California Rep. Dana Rohrbacher was knocked unconscious during an angry protest that activists staged outside the congressman’s office.

An email warning parade organizers promised 200 or more protesters would rush into the parade and drag the Republican marchers out, if that’s what it took to keep them from participating.

“You have seen how much power we have downtown and that the police cannot stop us from shutting down roads so please consider your decision wisely,” the email warned. Portland has been a site for organized left-wing protests, which have often turned into violent riots.

A North Carolina GOP office was firebombed a month before the 2016 election and a building adjacent to it was spray painted with a message: “Nazi Republicans get out of town or else.”

Ethan Barton is a reporter at Daily Caller News Foundation.

6 Thoughts to “Trump Supporters and Republicans from Tennessee, Virginia, Florida and Rest of U.S. Subjected to Bigoted Attacks by Leftists”