Rallies were held in Nashville and across the country Tuesday following the Supreme Court’s decision to uphold President Trump’s travel ban on Muslim countries.

The latest, third version of the policy applies to five mostly Muslim countries as well as North Korea and Venezuela, NewsChannel 5 reports.

Chief Justice John Roberts said the ban was within the scope of Presidential authority to protect national security.

Predictably, some were not happy.

In Nashville, the American Muslim Advisory Council held a rally at Legislative Plaza.

The council and MPower Change organized on a Facebook page. The page said, “It’s crucial that we have a visible, strong presence across the country of people who care about Muslim and refugee communities and oppose Trump’s White Nationalist agenda. The #NoMuslimBanEver campaign is calling for a national day of action whenever the decision is announced.” 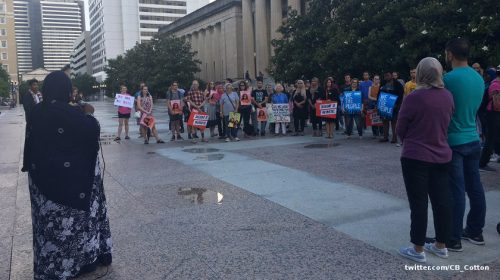 It is unclear how many people actually attended.

Challengers had argued the administration’s order was discriminatory and unconstitutional because the president had called for a ban on Muslim travelers from the Middle East while he was on the campaign trail in 2016, The Tennessean said. They said such a policy would violate the First Amendment and a portion of immigration law that allows presidential authority, but bars discrimination.

However, the president called the court’s decision “a tremendous victory for the American People and the Constitution,” Fox News says. Trump described the court decision as “a moment of profound vindication following months of hysterical commentary from the media and Democratic politicians who refuse to do what it takes to secure our border and our country.”

The countries involved have mostly Muslim populations: Iran, Libya, Sudan, Syria and Yemen. Chad was recently removed from the list after the administration said that country had beefed up its information-sharing.