An Arizona-based polling company, Data Orbital, has released poll results in the Tennessee Governor’s race that show a deadlocked race between Diane Black and Randy Boyd, with Bill Lee lurking not far behind. The Data Orbital Poll was conducted from June 27 to 30 and polled 700 likely GOP voters. 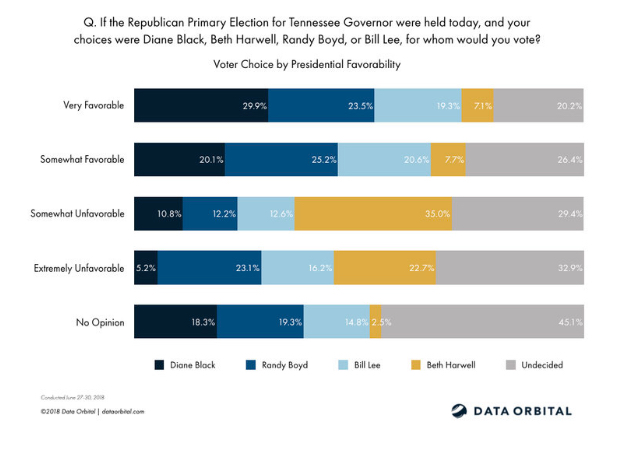 According to the Data Orbital survey Black currently has 24.3 percent, Boyd 23.1 percent, Lee 18.8 percent, Harwell 10 percent, and 23 percent undecided. The Tennessee Star Poll, released last week, had slightly different results, with Boyd in the lead with 32.6 percent, followed by Black with 26.9 percent, Lee with 20.3 percent and Harwell was at 6.9 percent.

The Tennessee Star Poll was conducted by Triton Research and Polling, which polled 1040 likely GOP Primary voters between June 26 and June 29, approximately 50% more than polled by Data Orbital. It also appears that the Data Orbital poll may have over-surveyed Middle Tennessee while under surveying voters in East and West Tennessee, where Boyd enjoys greater support. Data Orbital did not make the geographic cross-tabs of its poll available.

“Boyd has a significant lead in East and West Tennessee,” Gill says, “and our survey has him about ten points higher statewide and undecided about ten points less. Harwell is polling about double in the Data Orbital poll than other surveys are indicating which would underline higher Middle Tennessee data collection.” 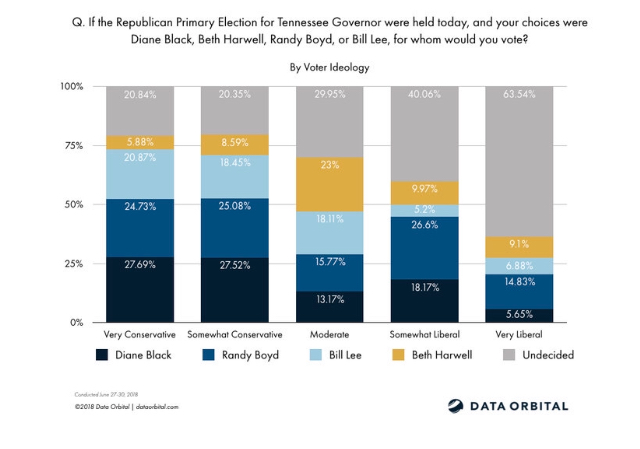 “The other demographic breakdowns in the Data Orbital poll are consistent with what we are seeing, including the fact that Lee is drawing relatively strong support among younger voters and that Harwell is pulling a higher portion of her support from those who have low regard for President Trump and are more moderate to liberal than the main base of GOP primary voters,” Gill adds. “Unfortunately for her, the number of GOP primary voters who fit those descriptions are small.”

The bottom line, according to Gill, is that all of the recent polls show Lee emerging as a clear threat to Diane Black, which is why she is now attacking him with hard-hitting television and radio ads.

George Khalaf, President of Data Orbital, issued the following statement on these results: “Looking at the Gubernatorial race in Tennessee we see Lee with some growth from past polls. This growth can be seen in Lee’s numbers in the younger age groups. With the largest amount of undecided voters being 36-50 year old age group and on the middle of political spectrum this race will be key to watch as we approach the August 2nd primary.”