6th Congressional District candidate John Rose was on K Street in Washington, D.C. earlier this week raising money from a group of PACs and lobbyists.

His rivals for the Republican nomination to succeed Rep. Diane Black (R-TN-06) spent the time talking to constituents across the district back in Tennessee.

Rose had two fundraising events in Washington, D.C. this week.

Tennessee Star Political Editor Steve Gill notes that is unusual for a candidate to be in Washington DC the week before a tightly contested election ends, especially an election where everyone is trying to distance themselves from the “swamp in DC.”

“The optics are bad, and the timing is worse,” Gill observes.

“It is the kind of late mistake that can swing a few points in an election and make the difference between winning and losing. The Corlew team was quick to take advantage of this unforced error, which was a gift to them courtesy of the Rose team. They even had a new TV spot up in just a few hours that included video of Rose in DC,” he adds.

You can watch the Corlew TV ad here.

You can see the video of Rose on Capitol Hill entering his fundraising event here below:

On Tuesday night, sources tell The Star, Rose apparently met with a number of lobbyists at a restaurant on K Street, the center for lobbyist offices, in Washington, D.C.

Then on Wednesday morning, Rose met for breakfast with another group of lobbyists at a Capitol Hill  town house owned by the American Dental Association: 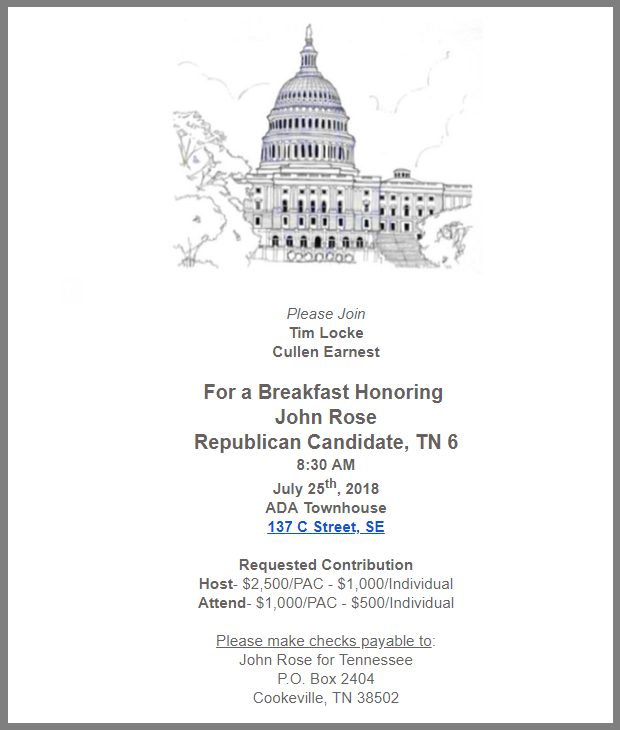 It turns out to be an unfortunate choice of breakfast venue for the Rose campaign, since the American Dental Association has contributed $60,000 to the Democratic Congressional Campaign Committee this election cycle in an effort to help give Democrats a majority in the U.S. House of Representatives.

It’s not that bad for the Rose campaign though.

2 Thoughts to “OFF THE RECORD: John Rose Raises Money on K Street in Washington, D.C.”