Before he packs up and vacates the Tennessee governor’s mansion early next year, Bill Haslam wants a dialogue with you about ways to improve TNReady.

Haslam, at the state capitol Tuesday, announced what he described as a listening tour to do just that.

The current governor and a team of handpicked educators will travel to six different cities as part of that tour, he said.

The first scheduled stop is Friday, in Knoxville. 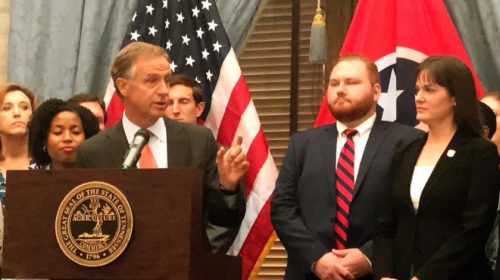 “Recently, there has been a lot of criticism of TNReady,” Haslam said.

“Much of that criticism was earned. We experienced significant problems with the implantation and delivery, and these are problems that we know are unacceptable.”

Haslam said he wants to fix the problems instead of “pointing fingers and casting blame.”

“I am committed to doing what I can as governor before I leave to get this right,” Haslam said.

“To throw in the towel on assessment is the wrong approach.”

As he talked, Haslam was flanked by several people he described as “TNReady Ambassadors” — teachers, assessment coordinators, and other educators from around the state.

Among them — Wayne Miller, a former executive director of the Tennessee Organization of School Superintendents.

Miller will lead the effort straight out of the governor’s office, Haslam said.

The governor said he wanted Miller for this task and not an out-of-state consultant.

As part of the listening tour, Haslam said he wants candor when it comes to TNReady.

State officials will choose a new assessment partner during the 2018-19 school year. Among other things, Haslam said he wants feedback on choosing the best one available.

Haslam and Tennessee Department of Education Commissioner Candice McQueen will partake in each phase of the tour, according to a press release.

State officials are still finalizing specific times and locations, according to a press release.

One Thought to “Gov. Bill Haslam Says Don’t Throw in the Towel on TNReady”