It’s probably important to preface any conversation on morality by noting that humans often struggle—mightily—to agree on what morality is. While it’s a thorny topic to define and explain, it would, of course, be foolish to avoid the pursuit of moral truths for this reason.

Jonathan Haidt, a social psychologist at the University of Virginia who has researched morality and culture for nearly 30 years, apparently agrees. Haidt has spent the better part of his career attempting to understand and explain the underpinnings of human morality.

What Do We Know about Morality?

During a TED talk a number of years ago, Haidt shared his discovery that contrary to the idea that humans begin as a blank slate—“the worst idea in all psychology,” he says—humans are born with a “first draft” of moral knowledge. Essentially, Haidt argues, humans possess innate but malleable sets of values “organized in advance of experience.”

So if the slate is not blank, what’s on it?

To find out, Haidt and a colleague read the most current literature on anthropology, cultural variations, and evolutionary psychology to identify cross-cultural matches. They found five primary categories that serve as our moral foundation:

1) Care/harm: This foundation is related to our long evolution as mammals with attachment systems and an ability to feel (and dislike) the pain of others. It underlies virtues of kindness, gentleness, and nurturance.
2) Fairness/reciprocity: This foundation is related to the evolutionary process of reciprocal altruism. It generates ideas of justice, rights, and autonomy. [Note: In our original conception, Fairness included concerns about equality, which are more strongly endorsed by political liberals. However, as we reformulated the theory in 2011 based on new data, we emphasize proportionality, which is endorsed by everyone, but is more strongly endorsed by conservatives.]
3) Loyalty/betrayal: This foundation is related to our long history as tribal creatures able to form shifting coalitions. It underlies virtues of patriotism and self-sacrifice for the group. It is active anytime people feel that it’s “one for all, and all for one.”
4) Authority/subversion: This foundation was shaped by our long primate history of hierarchical social interactions. It underlies virtues of leadership and followership, including deference to legitimate authority and respect for traditions.
5) Sanctity/degradation: This foundation was shaped by the psychology of disgust and contamination. It underlies religious notions of striving to live in an elevated, less carnal, more noble way. It underlies the widespread idea that the body is a temple which can be desecrated by immoral activities and contaminants (an idea not unique to religious traditions).

Morality and the “Other Side” 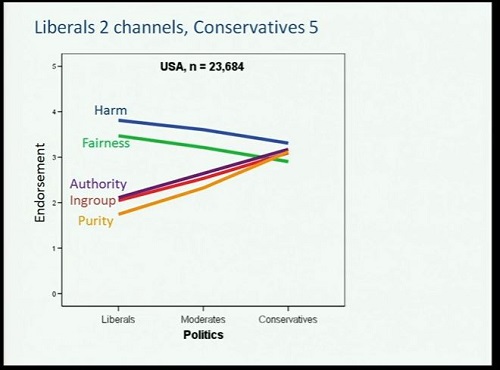 What Haidt found is that both conservatives and liberals recognize the Harm/Care and Fairness/Reciprocity values. Liberal-minded people, however, tend to reject the three remaining foundational values—Loyalty/betrayal, Authority/subversion, and Sanctity/degradation—while conservatives accept them. It’s an extraordinary difference, and it helps explain why many liberals and conservatives in America think “the other side” is bonkers.

Liberals might contend, of course, that these values are not proper morals at all but base human traits responsible for xenophobia, religious oppression, etc. Haidt rejects this thesis. And through a series of historical illustrations, psychological studies, and cross-cultural references, he explains that many liberals often fail to appreciate a timeless truth that conservatives usually accept: order tends to decay. (A truth, I’ll add, buttressed by the second law of thermodynamics.)

Now, Haidt is not suggesting conservatives are superior to liberals. He points out that conservatives tend to value order even at the cost of those at the bottom of society, which can result in morally dubious social implications. Liberals, however, often desire change even at the risk of anarchy.

Many people, of course, will refuse to accept Haidt’s explanation of moral reality. This is not surprising. The human inclination is to believe in one’s own understanding of morality, and many people will live their entire lives without seriously attempting to understand their ideological counterparts.

Trapped in a “Moral Matrix”

These people, Haidt says, reside on both sides of the ideological spectrum. They exist in what he calls a “moral matrix.”

People will have a difficult time agreeing on anything if they view the moral underpinnings of society through vastly divergent lenses.

“If you think that half of America votes Republican because they’re blinded… then my message to you is you’re trapped in a moral matrix,” Haidt said. “You can either take the blue pill and stick to your comforting delusions. Or you can take the red pill, learn some moral psychology, and step outside your moral matrix.”

So what to make of all this? I must say, I found Haidt’s explanations pretty insightful. It certainly helps explain our contentious culture. Even many intelligent and reasonable people, after all, will have a difficult time agreeing on anything if they view the moral underpinnings of society through vastly divergent lenses.

It doesn’t seem a stretch to contend that liberals in America have largely abandoned the latter three values (with some exceptions, of course), or that conservatives are highly influenced by them.

I’ll be interested to hear what readers think of Haidt’s thesis. But remember, this is a bit of a catch-22: if one reflexively smashes Haidt’s theory, it may only be evidence that this person is living in a moral matrix himself.

Jonathan Miltimore is the Managing Editor of FEE.org. Serving previously as Director of Digital Media at Intellectual Takeout, Jon was responsible for daily editorial content, web strategy, and social media operations. Before that, he was the Senior Editor of The History Channel Magazine, Managing Editor at Scout.com, and general assignment reporter for the Panama City News Herald. Jon also served as an intern in the speechwriting department under George W. Bush.

Originally published at and reprinted with permission from FEE.org