Women’s March founder Teresa Shook took to Facebook Monday to call on the liberal leaders of the progressive movement to step down as many former supports #WalkAway over the group’s leaders’ refusal to condemn anti-Semitic and homophobic statements by well-known allies.

“As Founder of the Women’s March, my original vision and intent was to show the capacity of human beings to stand in solidarity and love against the hateful rhetoric that had become a part of the political landscape in the U.S. and around the world,” Shook wrote, adding:

Comments left on the post by individuals were overwhelming supportive, with many explicitly thanking Shook for speaking out against the rhetoric that had caused them to leave the movement.

“Thank you! I have stepped back from this group because of leadership,” former supporter Suzanne Perkins replied. “I will be happy to return once they are gone.”

Jillan Beth echoed the sentiment, writing, “As a liberal Jew I definitely stepped away from this once amazing movement because of these hateful ignorant affiliations.”

However, not everyone was optimistic. Alisa Pinkhasik wrote, “Realistically, the Women’s March is lost. You should start something new with a different name and no association with the likes of them…” 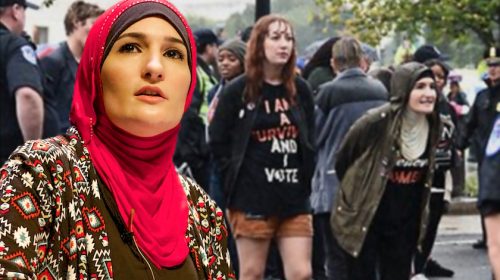 Bonnie Carter added, “ Teresa, meet the infiltration of communist ideology. After they refuse to step down, maybe we can unite. Hopefully, they will. I bet not. We can’t seem to get a word in edge-wise, literally.”

Linda Sarsour’s response shortly after Shook’s remarks posted seemed to focus on the fame and fortune aspect of the Women’s March movement, “You put thousands and thousands of hours in fundraising, organizing, envisioning, building and strategizing for a movement that inspires the entire world and you are still at it 2 years later – and the person who makes the demands and wants credit is the one who made the Facebook event.”

Thank G-d. It’s long past due and I’m very grateful for one. I would also like to address Linda Sarsour’s rebuttal…
This movement was suppose to stand for unity and love. Criticizing Teresa because you didn’t get credit shows how lost and out of focus you are. You don’t do something for credit, you do it did for the love of it and the hoped outcome. As you claim to have invested thousands of hours and complaining someone else got the credit, I myself have spent thousands of hours with no sleep delivering thousands of babies and saving thousands of lives not for the credit, but in hopes for a better tomorrow as many other nurses and doctors and I dare not even begin the counting the thousands of tears cried by the families of the fallen in which they have given up their lives so you can have the very freedom to march in this amazing country. Shalom.

Tamika Mallory posted what appeared to be a rebuttal to Shook’s call without directly mentioning the Women’s March.

The most bruising response came from the Women’s March verified Facebook page, posting a joint statement by Bland, Perez, Mallory, and Sarsour:

Today, Teresa Shook weighed in, irresponsibly, as have other organizations attempting in this moment to take advantage of our growing pains to try and fracture our network. Groups that have benefited from our work but refuse to organize in accordance with our Unity Principles clearly have no interest in building the world our principles envision. They have not done the work to mobilize women from diverse backgrounds across the nation.

We are imperfect. We don’t know everything and we have caused harm. At times we have responded with hurt. But we are committed to learning. We will continue to work through the good and the bad, the impact and the harm — of building an intersectional movement that our daughters, and our daughters’ daughters can be proud of.

We are grateful for people who HAVE been with us for the past two years, wrestling with the challenges and opportunities of what we are trying to build. Our ongoing work speaks for itself. That’s our focus, not armchair critiques from those who want to take credit for our labor.