Civil discourse is dead – or so one might think given the current state of affairs in this country. It doesn’t matter what political views you hold, one thing every single American can agree on is that as a society, we have become incapable of having meaningful conversations about controversial – or seemingly controversial – topics.

We live in a country where First Amendment rights to free speech and free expression have given us the wonderful privilege of being exposed to a wide range of different viewpoints on a regular basis. The only caveat to this, aside from the government occasionally suppressing speech, is that in order to take advantage of this privilege, you have to be willing to listen to others with whom you may disagree. And this is where Americans come up short.

It would appear that many are no longer capable of listening to the other side. If anyone doubts this is true, simply log in to Twitter and read one controversial or political thread. You just might lose your faith in humanity in the process. Instead of deliberating and breaking down a topic to its finer points, most people have resorted to emotive arguments and name-calling. Instead of surrounding ourselves with diverse thought, we silo ourselves off into echo chambers.

And the result of this has been a fragmented and disconnected society in which no one knows how to discuss complex issues anymore. As Jonathan Haidt, author of The Righteous Mind: Why Good People are Divided by Politics and Religion, writes:

People bind themselves into political teams that share moral narratives. Once they accept a particular narrative, they become blind to alternative moral worlds.

Thankfully, all is not lost. In the distant corners of the internet – a realm where there is almost nothing too shocking – individuals are learning how to talk to those with opposing views, and it’s actually making users more tolerant and open-minded, something our modern world desperately needs.

By now, we are all familiar with the meme of a man on a college campus, sitting behind a table with a banner that reads, “ …. …. Change my mind.” Of course, as it was memed, it was captioned with things like, “taxation is theft, change my mind” or “pineapples don’t belong on pizza, change my mind,” and so on and so forth. But the meme represented something bigger. 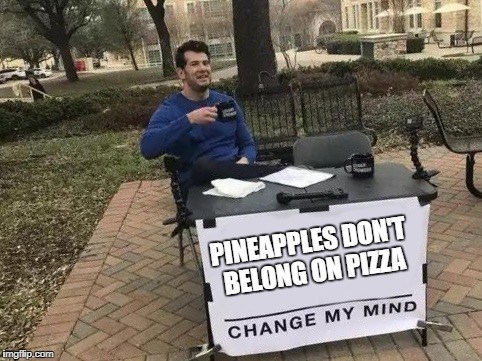 “Change my mind” has become such a hostile phrase because, by and large, we do not change our minds anymore. We cling to our views no matter how weak our arguments might be because we have come to see our opinions as indistinguishable from our identity. And when we feel as though our identity is being attacked, we tend to get chippy. Unfortunately, this has resulted in the breakdown of genuine conversation. And in our culture today, the idea that we could actually experience civil discourse has become a meme in and of itself.

Yet, while minds are closing all over the internet, Reddit is providing a space for civil discourse to unfold. The subreddit “Change My View” (CMV) has 688,000-plus users. In 2013, long before the “change my mind” meme was born and before the era of Trump made civil discourse all but impossible, the CMV subreddit was started by musician Kal Turnbull.

Then a high school student living in Scotland, Turnbull wanted to create a platform where people with opposing views could come talk through their differences in a respectful manner. And while this was certainly a problem in 2013, nothing could have prepared Turnbull for the escalation of this problem in the coming years.

A large aspect of CMV’s mission is “built around the idea that in order to resolve our differences, we must first understand them.” This is a concept that has been all but lost in today’s culture, where people prefer to scream over each other rather than have an honest conversation about their beliefs. Empathy is no longer a priority, and without the ability to walk in someone else’s shoes and see things from their perspective, the divides between us keep growing wider and wider.

As The Next Web described it: “CMV is all about challenging long-standing beliefs, the types of ideals that are often so ingrained in a person that they make up a significant portion of their identity.” This is no small task. But CMV is able to foster the type of environment where people feel safe to disagree and discuss by creating a community with a very specific set of voluntary rules.

As opinions become more polarized, there is a lot of talk about regulating the internet. In fact, Twitter, Facebook, YouTube, and other social media platforms have already begun to censor who can broadcast via their platforms, as well as censoring the actual content. Rather than censor content, Reddit allows almost any topic to be discussed, no matter how shocking it might be. To ensure that this doesn’t devolve into chaos, each subreddit is allowed to set its own rules for acceptable behavior. With so many different topics being discussed, the rules range from being almost non-existent to quite rigorous. The Reddit.com/r/feminism thread, for example, has such strict rules, its third rule even states that “promoting regressive agendas is not permitted.” Likewise, the Reddit.com/r/communism thread prohibits non-Marxists from participating in any discussions.

CMV has laid out five rules for its users. Since each thread participant agrees to abide by the five stated rules before posting, everyone knows, at least to some extent, what can be expected from each discussion. And anyone who plans on breaking these rules can rest assured that they will suffer the consequences of a three-day ban for the first offense and the possibility of a permanent ban if further infractions occur.

The second rule asks that users refrain from being rude or hostile to each other, an important factor in keeping the conversation civil. The third rule is pretty self-explanatory and asks that users “refrain from accusing OP or anyone else of being unwilling to change their view.” The fourth – and perhaps the most interesting rule – is about deltas, and we will get to that one momentarily. The fifth rule states that “comments must contribute meaningfully to the conversation.” This means that if a user comments something silly or asinine just to derail the conversation, they can be banned and their comment deleted for failure to contribute. This helps keep the conversation meaningful and on track.

These rules also help provide a framework in which users know what to expect. Elizabeth Weeks, one of the subreddit’s moderators, said that the rules “set up guardrails, so you could expect to have a quality experience each time.”

Getting back to the deltas, the fourth rule states, “award a delta if you’ve acknowledged a change in your view. Do not use deltas for any other purpose.” Named in honor of the math symbol that means “change,” the delta is used to mark when an original poster has changed his or her mind. And since this provides evidence as to how many users have undergone a change, there is tangible proof that CMV is working and meaningful conversations are actually taking place.

As The Next Web explains:

Deltas, according to a page explaining the system, are an homage to the mathematics field, where the delta symbol represents change. … Any user, whether they’re [the original poster] or not, should reply to a comment that changed their view with a delta symbol and an explanation of the change…

CMV gamifies this healthy conversation in many ways. The first is through the use of a DeltaBot, which calculates awarded deltas and updates a leaderboard, called a deltaboard, where necessary. Redditors can monitor their standing on the deltaboard located in the sidebar next to each post.

The use of deltas not only allows data to be collected on the actual changing of minds, but it also lets each user see how impactful they are. This can be used to help a user either decide to continue on with a current strategy or encourage him or her to go back to the drawing board and find a better way to be effective.

The Voice of Reason

Americans are desperate for stimulating conversations. Our echo chambers might be comforting, but stay in them too long and you will find yourself hungry for an alternative view. Fortunately, CMV is giving people a platform to discuss anything. There is literally no topic off the table so long as the original poster is willing to defend his or her position. And instead of dissolving into pandemonium, people are finally starting to listen to each other.

Another one of the CMV’s moderators, Brett Johnson, said, “If people feel heard and understood, they are more likely to listen to what you have to say.” And this message is clearly resonating. In addition to being a popular subreddit, “Change My View” is now a podcast, as well. People seem to be open to having difficult conversations so long as they are being treated with dignity and respect. Weeks said, “People respond better if you don’t start out guns blazing, accusing them of being dumb or nefarious.”

While the CMV subreddit is creating the model for how civil discourse in the modern era should learn. Some are skeptical that it can have a wider reach. The Next Web says:

Whereas users at CMV opt-in, thereby agreeing to this level of moderation, it’s less likely that your aunt on Facebook, for example, would conform to rules that could be interpreted as censorship—especially after earning a 30-day ban for calling “libtards” morons.

In other words, no matter how groundbreaking CMV might be, some people still prefer to keep themselves trapped in their echo chambers. Still, while not everyone on the internet is ready or willing to agree to have civil conversations, CMV is proving that there are still those out there who want to hear what the other side has to say. And that fact alone offers hope in these bleak times for civil discourse.

Brittany is a senior writer for the Foundation for Economic Education. Additionally, she is a co-host of Beltway Banthas, a podcast that combines Star Wars and politics. Brittany believes that the most effective way to promote individual liberty and free-market economics is by telling timely stories that highlight timeless principles.

Originally published at and reprinted with permission from FEE.org