Donald Trump became the first sitting U.S. president to visit North Korea, stepping across the border during a meeting at the demilitarized zone with North Korean leader Kim Jong Un.

After shaking hands with Kim at the Panmunjom border village, Trump walked across the military demarcation line separating the two Koreas. Kim and Trump then crossed the border back into South Korea.

“Stepping across that line was a great honor,” said Trump, who invited Kim to the United States for another meeting.

Trump on Saturday had said the meeting would only last two minutes. However, Trump’s private talks with Kim lasted about 50 minutes, turning into an impromptu summit.

When Trump emerged from the meeting, he announced he and Kim had agreed to form teams to restart working level talks.

“They will meet over the next few weeks and they’re going to start a process and we’ll see what happens,” Trump said. “Speed is not the object…we want a really comprehensive, good deal.”

It is the third meeting between Kim and Trump, following meetings in Singapore last June and in Vietnam in February. Though the DMZ summit raises hopes of revived nuclear talks, it’s not clear how much progress was made.

Trump announced his negotiating team would continue to be led by Steve Biegun, the U.S. special envoy for North Korea. He said that North Korea “was also putting someone in charge who we know and who we like,” though he didn’t elaborate.

After the Singapore summit, Trump also announced his deputies would soon start working level negotiations. But those talks soon broke down over disagreements about how to pace sanctions relief with North Korea’s steps to dismantle its nuclear weapons.

“It’s where we were about 15 months ago,” says Vipin Narang, a nuclear expert and professor at the Massachusetts Institute of Technology. “One step forward, two steps back. But this is one step forward.”

“Given where we were last week, it’s not nothing,” he added.

The disagreements between the U.S. and North Korea remain vast. Not only has North Korea not provided a list of its nuclear sites, Washington and Pyongyang have not even agreed on what the idea of denuclearization means.

In recent weeks, North Korea expressed increasing levels of anger at the U.S. refusal to relax sanctions. Trump prefers a “big deal” under which North Korea commits to completely abandoning his nuclear weapons before relaxing any sanctions.

In their public comments Sunday, neither Trump nor Kim gave any indication of softening their stances.

“There was no sign that the two sides were prepared to address the underlying substantive problems, like differences over sanctions relief, that have made diplomacy so difficult,” says Mintaro Oba, a former State Department official and Korea specialist.

“Unless the working-level negotiators have a mandate to try new, more constructive approaches to these problems, it’s hard to see what they can achieve,” he adds.

U.S. officials have given mixed signals about whether they are open to an incremental approach, whereby Pyongyang would give up its nuclear program in stages in exchange for reciprocal steps by Washington.

Trump visited the DMZ with South Korean President Moon Jae-in. Though the three leaders did not make any public statement together, they briefly appeared together before Trump and Kim met for private talks.

At an earlier military briefing with Moon at a DMZ lookout point, Trump said the demilitarized zone used to be “very, very dangerous… but after our first summit, all the danger went away.”

Trump also defended his North Korea policy and blasted media that have questioned whether he should meet with Kim, given that talks with North Korea are stalled.

“I say that for the press, they have no appreciation for what we’ve done,” Trump said. 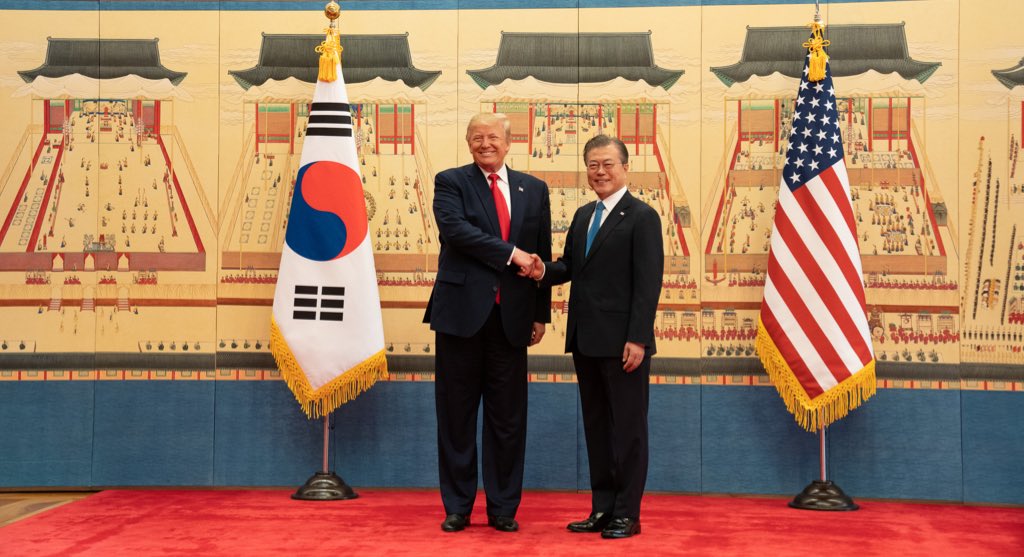 While many warn the latest summit risked normalizing friendly relations with a brutal dictator, South Korea’s President Moon said the meeting was an important step toward building trust with North Korea.

“We have taken one big step forward,” Moon said. “The…Korean people have been given hope thanks to today.”

But Bonnie Glaser with the Center for Strategic and International Studies said that for Trump, stepping inside North Korea might not signify any change in policy.

Trump, she said, delights in doing things no president has done before.”

Photo “President Trump and Chairman Kim at the DMZ” by Dan Scavino.