Two national elections, one decisive and the other a cliffhanger, have shaken the politics of the West to its core. In the United Kingdom, just last month, Conservative candidate Boris Johnson won a resolute victory for himself and his party. In the United States, barely three years ago, Republican candidate Donald Trump won the presidential election in a stunning upset where he narrowly lost the popular vote but logged a solid victory in the Electoral College.

The voters that supported these candidates represent a movement that has been building for several years but was not expected to result in a political realignment so disruptive and polarizing. Both candidates prevailed in the face of almost universal condemnation from the establishment media, the entertainment glitterati, most major political donors, and even members of their own parties.

The reasons for their success are no secret, the only surprise was the level of support they were able to attract. To repeat what everyone acknowledges—whether they agree or disagree—Johnson and Trump owe their political success to a populist reassertion of national sovereignty. They represent renegotiating bad trade deals, reconsidering mass immigration, restructuring tax laws to discourage exporting jobs, repealing crippling regulations, and rethinking foreign policy to replace nation building with principled realism.

There’s much more to this picture, however, though it’s something harder to recognize because it’s obscured by Johnson’s bombast and Trump’s bellicosity. While both of these politicians are channeling resurgent nationalism, they are also common sense centrists.

While common sense and centrism aren’t words the typical critic would use to characterize these men, the descriptions are apt. Both of them have changed their party loyalties over the years. Both of them are unwilling to engage in draconian budget cutting. Trump increased funding to the Veterans Administration. Johnson plans to invest more in the National Health Service. Both of them champion massive infrastructure investments. Both of them are pragmatists.

The politicians who oppose Trump and Johnson, on the other hand, are confirmed globalists. Their agenda prioritizes values antithetical to nationalism. They tout the virtues of free trade, as if it’s a revelation that wool is cheaper in Scotland and wine is cheaper in France, and use it as the theoretical bludgeon to justify exporting millions of jobs to overseas sweatshops. They tout the virtues of integration and multiculturalism, but use them to treat their own peoples and their own cultures as interchangeable with any others. They claim there is an urgent need to discontinue use of fossil fuel, nuclear energy, and even hydroelectric power, but collect obscene profits as the attendant regulations create barriers that only the biggest multinationals can navigate.

Shown below are four maps that graphically illustrate the current voting trends by race in the United States and the United Kingdom. The first one shows the United States distribution of votes by county in the 2016 presidential election, with the blue representing those counties that supported Hillary Clinton’s candidacy, and the red representing those counties that supported Donald Trump. The second one shows these same counties according to their concentrations of nonwhite residents. 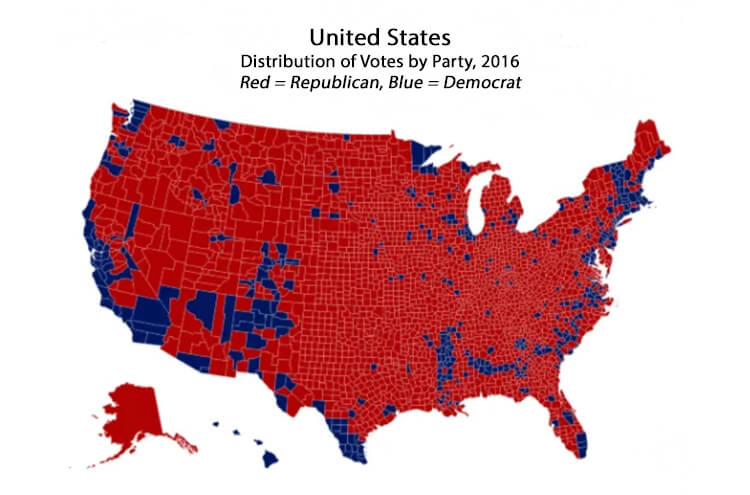 As can be seen on this second map, below, the concentrations of nonwhites in the United States are depicted by a spectrum from very light green, which are counties that are 90 percent white, to deep purple, which are counties where over 50 percent of the residents are nonwhite.

The correlation between these two maps is striking. On both maps there is a crescent running through the South from Northern Louisiana down through Alabama and Georgia and up into the Carolinas, where blacks voted overwhelmingly for Clinton. Similarly, on both maps there are concentrations of Hispanic voters supporting Clinton in a line starting on the Northern California coast and running south and east along the border all the way through to the Gulf of Mexico. Washington, D.C., which is 90 percent black, and Miami, Florida, which is majority Hispanic, went for Clinton, as did most urban centers where there are significant nonwhite populations. 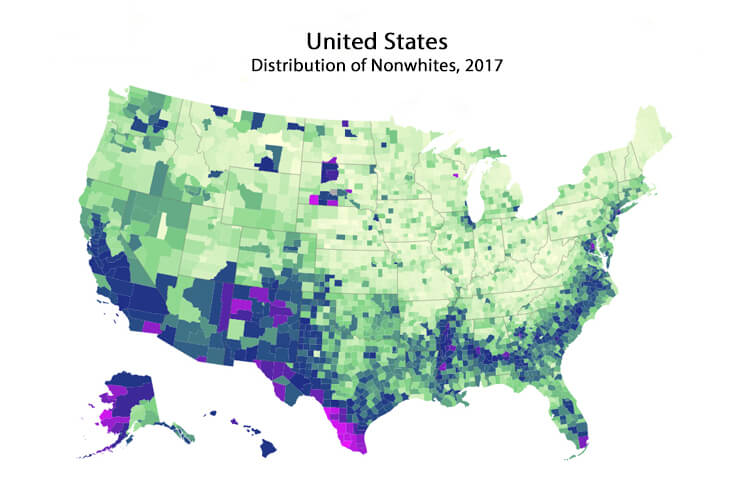 The most recent data on voting patterns by ethnicity in the United States verify what is evident from these maps. According to the Pew Research Center, in 2018 U.S. congressional races, 69 percent of Hispanics voted for Democratic candidates, as did 77 percent of Asians, and 90 percent of blacks. Only 44 percent of whites voted Democrat.

Before speculating on what this all means, it is instructive to view similar maps for the recent parliamentary elections in the United Kingdom, because the trend of nonwhite support for the globalist agenda is equally evident in that country. The visual evidence, in fact, is uncanny, despite needing to take into account several political parties instead of just two.

As the map showing the distribution of votes by party demonstrates, setting aside the regional parties in Scotland and Northern Ireland, there were three major parties vying for seats in Parliament. Two of them represented globalist interests; depicted in red, the Labour Party, and in orange, the Liberal Party. The sea of blue, on the other hand, depicts the seats wo­n by Boris Johnson’s Conservative Party. 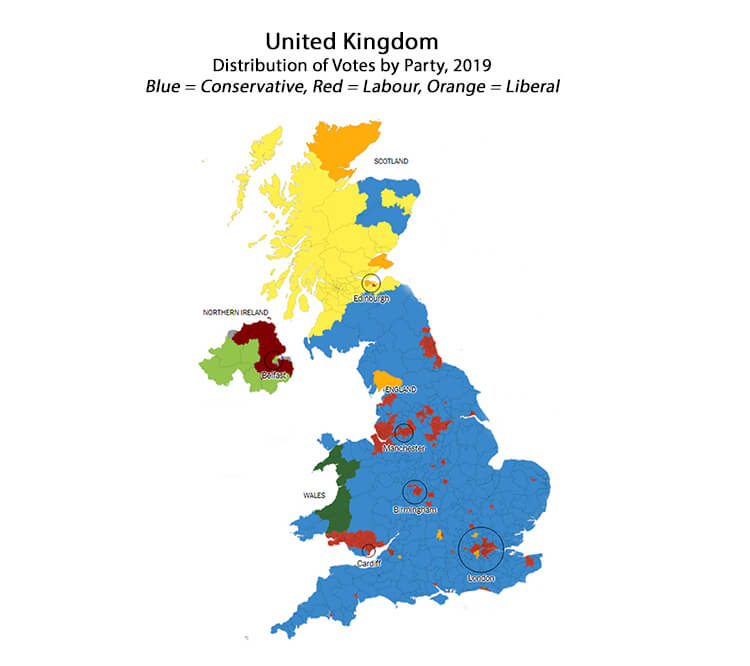 As can be seen on the next map, below, apart from significant swatches of Scotland, which voted Liberal because they want to keep the flow of North Sea Oil royalties unimpeded by any potential Brexit related obstacles, the globalist vote is concentrated in precisely the same places where nonwhites are concentrated. The areas where the Labour Party won include the metropolitan areas of Liverpool, Manchester, Leeds, and Sheffield in the English Midlands. Moving south, Labour was victorious in Birmingham, Nottingham and Leicester, along with, of course, nearly all of the area in and around London, where the population of the capital city is now over 50 percent nonwhite. 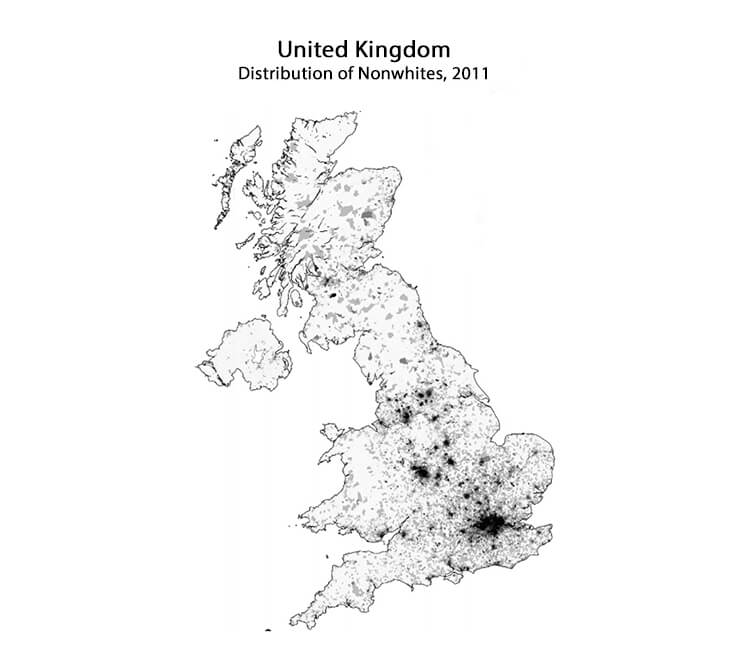 Data already compiled by the British Parliament confirms what these maps suggest. In the 2019 realignment, with four major parties to choose from (and parties other than these four garnered five percent of the overall vote), white voters preferred the Conservative Party over the Labour Party by a margin of 45 percent to 38 percent. Nonwhites, on the other hand, supported the Labour Party by an overwhelming 73 percent, with only 19 percent supporting the Conservatives.

What Does This All Mean?

The significance should be clear to anyone paying attention. In the United States as well as in the United Kingdom, there is a consensus among nonwhites in favor of loose immigration policies, generous welfare and entitlement programs, along with support for favored elements of the liberal agenda such as strict gun control legislation, and laws restricting free speech if it is deemed hateful or offensive. All of these political preferences, to the extent they have become policy, are threats to national sovereignty.

A partial solution for those concerned about retaining national sovereignty would be to restrict immigration. In America, President Trump has worked hard to reduce illegal immigration and he has called for merit based legal immigration which at least would reduce the percentage of immigrants dependent on taxpayers. But birth-rate statistics by ethnicity indicate that the percentage of nonwhites in the United States (and the United Kingdom) will continue to increase even if immigration were stopped entirely.

With American realignment in favor of nationalism hanging by a thread, it isn’t enough to stop immigration, even if that were possible. It is also not likely, and probably not desirable, to succeed in polarizing the vote completely according to race, where, for example, 90 percent of whites supported a nationalist agenda, and 90 percent of nonwhites supported a globalist agenda. Such a campaign would inevitably drift further and further towards extremism.

The solution, if there is one, for nationalist centrists is to emphasize the centrism equally with the nationalism. This worked in the United Kingdom, where Boris Johnson was able to convince wary Labour Party voters that he not only did not intend to dismantle the National Health Service but he intended to invest in it. It will be interesting to see how he does that, because centrist solutions to America’s healthcare challenges do not involve a national health service.

On the other hand, in February 2016, it was Trump, and only Trump among the other 16 libertarian-beholden GOP candidates, who said in response to a question about alternatives to Obamacare, “I am not going to let people who need healthcare die on the streets.” Trump is a centrist.

Centrism in 21st century America doesn’t have to rely on historical precedents. It can be defined in terms that many on the far Left would consider to be far Right, because what used to be moderate, mainstream political sentiments are now tainted by the Left as far Right.

For example, a politician might consider himself to be a centrist even if he is in favor of gun rights, merit based immigration, free speech even when it is offensive or hateful, and endorses tariffs if that’s what it takes to enforce fair trade agreements.

Why shouldn’t endorsing development of fossil fuel and nuclear power as part of an “all of the above” energy policy be considered centrist? Why shouldn’t a centrist be willing to encourage publicly funded new roads and freeways so new suburbs can be built, leading to affordable home prices in precisely the same way as back in the 1950s and 1960s?

Why wouldn’t a centrist be in favor of slowing down a bit, and not spreading panic over “climate change,” when, despite media hysteria to the contrary, the science does not suggest any sort of looming catastrophe?

It isn’t clear that a centrist agenda will attract nonwhites in the same proportions that it attracts white voters, but there is no alternative but to try. An encouraging fact is it will not take a seismic shift in nonwhite voting patterns to deliver elections to nationalist candidates in the future. If 20 percent of blacks vote for Trump in 2020, instead of the 10 percent who voted for him in 2016, he will be elected in a landslide. Similarly, if Trump attracts a third of Hispanic voters, instead of around the roughly 20 percent who supported him in 2016 (the percentages are disputed), he will be elected in a landslide.

Ultimately, nationalists who are concerned about changing demographics have to ask themselves tough questions. Do you believe that a community of sovereign nations is a better international model for the 21st century than the globalist vision, where corporations and supranational institutions run the world? Do you believe that the Western values of individualism, property rights, and free speech are values that should appeal to everyone regardless of ethnicity? Do you think the emerging citizens of the world will eventually embrace a set of values that is very close to those pioneered by Western nations?

Nationalism, tempered by centrism, offers a political pathway towards a multiethnic future that should not be written off as an impossible sell until the sales pitch has been made.

Edward Ring is a senior fellow of the Center for American Greatness. He is a co-founder of the California Policy Center, a free-market think tank based in Southern California, where he served as their first president. He is a prolific writer on the topics of political reform and sustainable economic development. Ring, a fifth-generation Californian, has an undergraduate degree in political science from UC Davis, and an MBA in finance from the University of Southern California.
Photo “American Flag” by Gage Skidmore. CC BY-SA 2.0.