On January 7, Speaker Nancy Pelosi (D-Calif.) wrote her Democratic colleagues to explain her strategy and to respond to Senate Majority Leader Mitch McConnell’s (R-Ky.) announcement that he would not negotiate impeachment trial procedures with the House. Instead, McConnell simply plans to use the procedures employed in the Clinton impeachment. Pelosi responded by writing:

Sadly, Leader McConnell has made clear that his loyalty is to the President and not the Constitution. Leader McConnell has insisted that the approach under consideration is identical to those of the Clinton trial and that “fair is fair.” This is simply not true. This process is not only unfair but designed to deprive Senators and the American people of crucial documents and testimony. Under the Clinton trial, witnesses were deposed.

I encourage you to review the attached document from Leader Schumer, which exposes Leader McConnell’s misleading claims about the Clinton trial process that are being used to justify the GOP’s decision to cover up witnesses and documentation that would fully expose the President’s wrongdoing.

That attachment sets forth six alleged “differences” between the Clinton impeachment circumstances and those of the Trump impeachment. All six basically boil down to one key concern that at the time of the Clinton Senate trial, “witnesses had already testified under oath in the grand jury and their testimony was available to the Senate. Everyone knew what they were going to say—because they had already said it.” 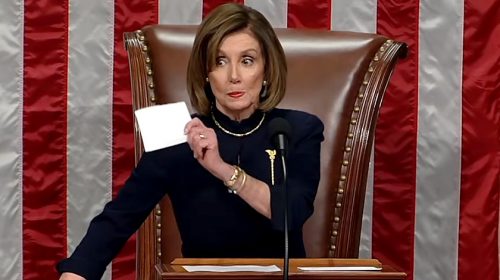 In contrast, Democrats have yet to hear from former National Security Advisor John Bolton, acting White House Chief of Staff Mick Mulvaney, Mulvaney advisor Robert Blair, and Office of Management and Budget official Michael Duffey, because they “refused to testify in the House even though they were deeply involved in the events in question.”

It’s an intellectually dishonest argument. The House abandoned all efforts to use the courts to compel the testimony of these witnesses. As I noted earlier:

The House Democrats have had their discovery. They had access to subpoenas and voluntary cooperation from witnesses. The White House turned over documents and published the transcript of President Trump’s July 25 call with Ukraine President Volodymyr Zelensky. No mas. Democrats voluntarily abandoned court assistance in enforcing subpoenas. By issuing articles of impeachment, the Democrats declared that they’re ready for trial.

McConnell echoed the same during a speech on the floor. “It’s not a constitutional crisis for a House to want more information than a president wants to give up,” McConnell said. “That’s not a constitutional crisis! It’s a routine occurrence. Separation of powers is messy—by design. Here’s what should have happened . . . either the president and Congress negotiate a settlement or the third branch of government, the judiciary, addresses the dispute between the other two.”

“Nobody made Chairman Schiff do this,” McConnell said of House Intelligence Committee Chairman Adam Schiff’s (D-Calif.) decision to forego court assistance to overcome the president’s lack of cooperation with the probe.

But, mind you, the process will only be deemed fair if the Democrats but not the Republicans get witnesses in the Senate trial. So, for example, Adam Schiff won’t be called as a witness (even though he claimed to have secret information about the case). Democrats oppose forcing the whistleblower to testify because of some unwritten rule requiring his identity to remain secret.

Meanwhile, Joe Biden indicated he intended to refuse to comply with any subpoena to testify in the Senate trial—claiming there is “no legal basis” for such a subpoena. He later clarified, “I am just not going to pretend that there is any legal basis for Republican subpoenas for my testimony in the impeachment trial. That is the point I was making yesterday and I reiterate: this impeachment is about Trump’s conduct, not mine.”

Schiff recently took to Twitter in a lame attempt to embarrass McConnell with old footage of him speaking on what should happen in Bill Clinton’s Senate trial 20 years ago.

Schiff failed to gather evidence for his own case (not that any such evidence even existed). The House impeached the president without enough evidence to prove its case. Now they’re trying to shift blame to the Senate for their malpractice.

In fact, there is nothing inconsistent between McConnell 20 years ago and McConnell today. Witnesses are fine if the process leads you there, McConnell says in both instances. But the Democrats don’t know what these witnesses will say. They want to use the Senate floor as a quasi-grand jury instead of trying a case based upon an established record. And, of course, they want to place off limits any witness who might corroborate the president’s defense that the Bidens’ shenanigans did indeed warrant investigation.

McConnell will not abide by the kangaroo court rules Schiff used in the House and Pelosi seeks to impose on the Senate. If witnesses are to be called, McConnell recently told Sean Hannity in a telephone interview, the Senate will not tolerate them only being witnesses for the House managers. The president has already made clear that he intends to call Joe and Hunter Biden as well as Adam Schiff to prove his innocence.

Adam Mill is a pen name. He works in Kansas City, Missouri as an attorney specializing in labor and employment and public administration law.

Content created by the Center for American Greatness, Inc. is available without charge to any eligible news publisher that can provide a significant audience. For licensing opportunities for our original content, please contact licensing@centerforamericangreatness.com.