RICHMOND, Virginia – Thousands of 2nd Amendment supporters gathered peacefully in Virginia Monday, demonstrating that the commitment to defend the God-given, constitutionally-protected right to keep and bear arms extends far beyond the Commonwealth’s borders.

Since 2002, the Virginia Citizens Defense League (VCDL) has organized a 2nd Amendment Lobby Day and Rally on Martin Luther King Day at Virginia’s capitol of Richmond. 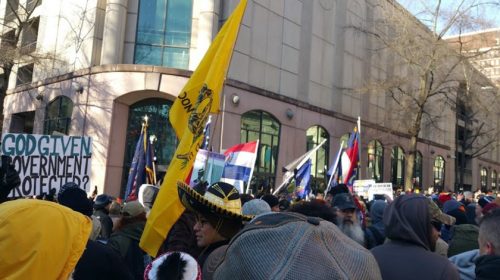 With the recent Democratic takeover of Virginia’s General Assembly, thanks to an influx of millions of dollars in campaign funding from gun-hating Democratic presidential hopeful Michael Bloomberg, Virginian’s gun rights have been threatened by legislators and governor alike through current and future legislation.

Virginia’s Governor Ralph Northam, under the premise of avoiding a repeat of Charlottesville in 2017, banned firearms from the grounds of the capitol for VCDLs Lobby Day and Rally. This, despite the fact that of the three deaths that occurred during the Unite the Right rally spurred by the removal of historic monuments, one was the result of being struck by a motor vehicle and the other two died in a helicopter crash.

Northam’s EO continued, raising suspicion about those who own firearms, called out demonstrators from outside the Commonwealth who may be armed and suggested that their purpose may be violence, rioting and insurrection. 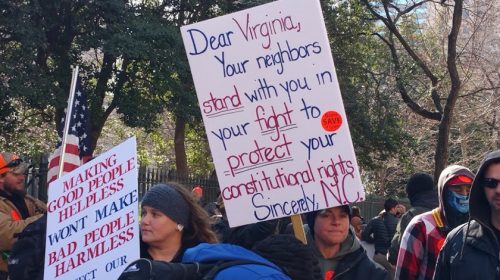 As Adam from Virginia told The Star and had also been said to him, “This isn’t a Virginia thing; it’s an America thing.” Michael, who drove 16 hours from Madison, Wisconsin relayed a similar sentiment to The Star, and expressed that Virginia’s anti-gun actions would soon follow in his home state.

Attendees numbered in the thousands even before the event started at 8 a.m. and despite the cold temperatures in the 20s, before the wind chill caused by the stiff breeze.

As attendees arrived at the Capitol Square area, blockaded with vehicles and a heavy law enforcement presence, were offered with virtually all donning bright orange round stickers “Guns Save Lives,” provided by VCDL.

VCDL also arranged dozens of buses from every corner of the commonwealth, and had portable toilets available for use by anyone in attendance. 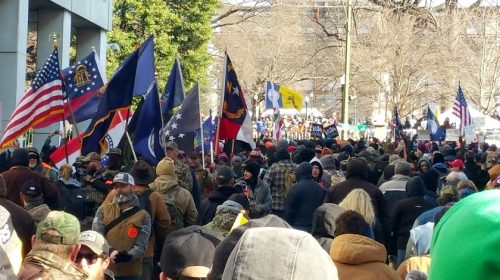 While attendees could not enter the single entrance fenced Capitol Square grounds equipped with magnetometers, many of the 2A supporters carried their firearms openly.

Perhaps an equal or more significant demonstration of 2A support were the number and variety of firearms carried to the event recognizable to firearms enthusiasts, which included not only a wide-range of handguns, but M1 Garand, SKS, Mosin Nagant, FN-FAL, Barrett 50 caliber firearms and literally countless of the left’s favorite target – the AR-15.

Four attendees from the greater Charlottesville area told The Star they all monitored communications throughout the event via their ham radios, including that of the capitol police, and noted there were no incidents.

They also specifically made note of the fact that, despite the number of firearms present and those attendees who carried long guns across their chests, handled them properly and in a “safe” manner.

Additionally, several Virginia State Police officers unofficially confirmed to The Star that they had no reports of any incidents during the event.

In fact, several Virginia attendees told The Star that they believed Governor Northam intended to incite a situation to put the pro-gun enthusiasts in a negative light. 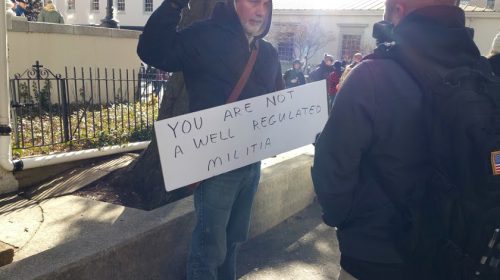 As The Star reported, at least two parties warned those planning to attend the 2A rally prior to the event.

Fortunately, there were no clashes between different factions and, in fact, only one protestor was observed after the event ended and outside the several blocks surrounding Capitol Square literally filled with thousands of 2A supporters. Additional attendees, not carrying firearms, filled the double-fenced capitol grounds.

Apparently not understanding the intent of the constitution, the protestor’s position, according to his hand-written sign, “You are not a well regulated militia.”

Signs carried by 2A supporters were about as varied as the firearms, and reflective of the knowledge of the sign holders. While many were related to the constitutional amendment, numerous others targeted Governor Northam. 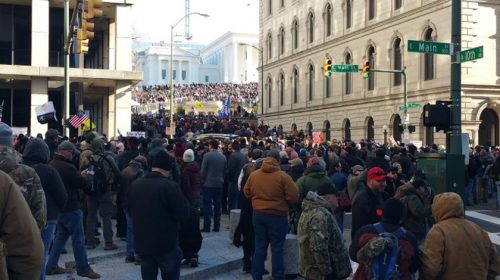 There were a number of militia groups that walked together, played music, carried flags or had other various displays that they were an organized group.

Several times throughout the event, there were impromptu chants of “U-S-A” and “We will not comply” as well as “Four more years.”

Support for President Trump and four more years through his 2020 re-election was very evident, not only through the chants, but attendees’ clothing and the many vendors selling Trump merchandise including flags, hats and shirts.

After a little more than four hours, the crowd of an estimated 22,000 according to Reuters, started to disburse, although it took a while as the camaraderie was obviously being enjoyed.

Patricia, a Virginian who volunteered on the spot to pick up trash, told The Star the goal was to leave the premises in better condition than they found it.