Gov. Tim Walz sent a letter to Secretary of State Mike Pompeo last week expressing his opposition to “any agreement resulting in the deportation of Hmong and Lao Minnesotans.”

“Our Hmong and Lao neighbors are small business owners, combat veterans who fought alongside American soldiers, and passionate people who have shaped Minnesota’s culture into what it is today. Most of the Southeast Asian Americans with a deportation order have never lived in those countries or no longer have ties there. Uprooting this community is unjust, immoral, and a betrayal of our country’s patriotic duty to these refugees,” Walz said in his letter. 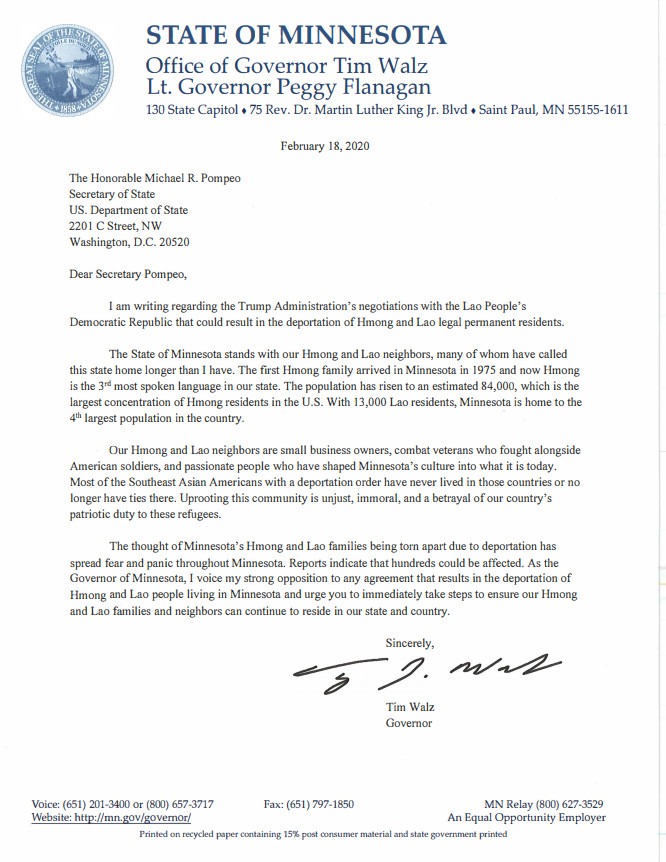 The Trump administration confirmed in a letter to Rep. Betty McCollum (D-MN-04) that it is negotiating a repatriation agreement with Laos. An estimated 4,716 Hmong and Lao residents who don’t have U.S. citizenship could be affected nationwide, including an estimated 450 Minnesota residents.

“The U.S. government’s position remains that every country has an international legal obligation to accept all its nationals that another country seeks to legally remove, expel, or deport,” wrote Mary Taylor, assistant secretary at the State Department’s Bureau of Legislative Affairs, in her letter to McCollum.

“This administration takes seriously its responsibility to ensure that U.S. laws are respected within our borders,” she continued. “Consequently, the U.S. government regularly urges foreign governments, including partners like Laos, to abide by their international obligation to accept the return of their nationals that are subject to a final order of removal.”

Taylor said that Lao nationals facing removal had the “opportunity to seek protection from return if they feared persecution or torture in Laos.”

McCollum said she plans to introduce legislation this week to “prevent President Trump from deporting any former Hmong or Lao refugees back to Laos.”

“The Lao government’s refusal to enter into an agreement with the Trump administration is the only obstacle preventing massive deportations from our Hmong and Lao communities,” she said.

Hmong families began arriving in the U.S. in the 1970s as refugees after fighting alongside American forces against the Communist government of Laos during the Vietnam War. Minnesota has the largest concentration of Hmong residents in the U.S. and Hmong is the third most spoken language in the state, according to Gov. Walz.

“I am just sick of the thought of our citizens, our neighbors, our business owners, veterans, and our friends in the Hmong and Laos community facing deportation under the Trump administration,” she said in a statement. “Uprooting this community is a despicable act that shouldn’t be tolerated. The deportations of Hmong and Lao and other Southeast Asians are unjust and a betrayal of the United States’ duty to refugees.”

Anthony Gockowski is managing editor of The Minnesota Sun and The Ohio Star. Follow Anthony on Twitter. Email tips to [email protected]

One Thought to “Walz Sends Letter to Trump Admin in Response to ‘Immoral’ Efforts to Deport Hmong, Lao Residents”