Trump took the test after coming to contact with individuals who recently had the virus.

Here are the president’s full remarks:

Thank you very much. We just completed a very good meeting of the Coronavirus Task Force. And we — we’re really — they’re really doing a great job, our professionals. The results are very — very, very good. And when you compare this to what’s happening around the world, we’re very proud of our people.

And there’s been a tremendous amount of coordination with states, with cities, and they’re a little smaller form of government, and they have things going well. They’re coordinating with us. And certain, in particular, I think California has been terrific — the relationship. New York has been really good. We’ve had some really good relationships in terms of — especially the hotspots. And we’re focused on those hotspots. In some areas, we don’t have no problem whatsoever, and we hope to keep it that way.

Before I turn this over to our great Vice President to provide an update, I just want to express my appreciation for the hard work done by the people behind me and the people back in the various offices, including the fact that I just left the Oval Office. So we have some people there that are probably watching this or they’re just working. We’re using the full power of the federal government to defeat the virus, and that’s what we’ve been doing.

Last week, we secured an initial $8.3 billion from Congress for the coronavirus, and that was quickly done and very efficiently done. And I want to thank all members of Congress.

Yesterday, I declared a national emergency, which was a very big deal because it opened up avenues that we would never be able to open up without it. And it will make it more than — it will make more than $50 billion available to us immediately in disaster relief funds. And that’s available for states, territories, and local governments. So that was really, really good.

We also reached an agreement yesterday on a new legislative package that will provide strong support for American families and communities in dealing with the coronavirus. So it was done very, very bipartisan. It was — it was very nice to see it. Probably the cooperation — I want to thank Secretary of Treasury, Steve Mnuchin, who did a fantastic job and worked with Nancy Pelosi and their representatives. And it was really great. It worked out very well.

And a lot of people are benefiting by a lot of — a lot of provisions in the bill, which they’re going to be discussing with you today. And the tremendous provision. So that’s something that we should talk about.

I was honored to see that the stock market — you were mostly there with us — set a record in a short period of time — over a 45-minute period that we had the press conference yesterday in the Rose Garden. That was a record. All-time record. I think we should do one of them every day, perhaps. How about every — how about five times a day? We’ll do one five times a day. But that was something to watch. And I had no idea. We walked back, I said, “So how did that work out?” They said, “Sir, you just set a new record in the history of the stock market.” So that was pretty good.

And those great companies that were there, they couldn’t have been too unhappy either, when you think about it, because they’re all very big, publicly listed companies. So they did a good job. And more importantly, they’re going to do a good job. When you look at CVS and Walmart, and all of the tremendous people that were there yesterday, these are the biggest and the best. And they’re opening up their facilities. They’re opening up — they’re, right now, literally, working right now on opening — doing something that’s never been done before, to the extent that we’re doing it. And so we’re very proud of them also.

The bill provides for free coronavirus testing for all Americans who should be tested. So people that are getting tested are getting this free. They don’t have to pay — because a lot of people said, “Gee, it’s a lot of money.” And it is. It’s a — you know, it’s a pretty complex test actually, and it costs money. And it’s being provided free, so people don’t have to worry about that.

It also provides paid sick and family medical leave for those who need it, including for those who have the virus, for caregivers, and those looking after children affected by school closures. So that’s all taken care of also. And we’ll continue all of these different actions. We have other things planned.

We’re going to also be working with companies that are affected financially. Our country is in the best financial shape. We’ve — it’s so different than in the past, over the years. If you look at some of the real big crises we had, it was financial problems and different things. We now are in very, very strong financial shape with all of the trade and all of the other things that we’ve been doing. It’s been pretty amazing.

We hope the Federal Reserve will finally get on board and do what they should do, because we’re doing things that they should be doing, frankly. And we can all do them together, but they should be much more proactive. Other boards and other countries and people representing those countries are taking a much more aggressive action than our Fed, for the most part.

So we’d like to see the — you know, if you look at central banks — yesterday, what they did — we want to see our Federal Reserve be much more proactive. It’s important. But in the meantime, we’re doing things that — that are — that have been really well received. Now, I guess you saw that yesterday at the end of the day with what we’ve done.

We’re all in this together. It’s something that nobody expected. It came out of China, and it’s one of those things that happened. It’s nobody’s fault. We all — we all will solve this problem; we’ll solve it well.

I think the American people have been incredible in the way they’ve acted. There’s been — and if you look at companies and sports leagues and all of the things, what they’ve done is — is just something very special, without being told, necessarily. In some cases, perhaps they were told, actually. But for the most part, they want to get it over with. They want to get it over with quickly and with very little death.

As of this moment we have 50 deaths, which is — a lot of good decisions were made, or that number could be many times that. But that’s based on a lot of good decisions, one or two in particular. You know that Europe was declared the hotspot yesterday, a big hotspot and number one. And we — we made a decision quite a bit prior to that, but we saw what was happening.

But if you have any questions, this group will be very happy to do it. But I just want to say they have been — led by Mike Pence — they have been incredible, the job they’re doing. They’re working 20 hours a day. This man is working 20 hours a day or maybe more. Is it more? I think it’s more. Tony has been working — I’m just looking at this whole group. And we’ve created a number of new stars, including the gentleman right behind me. I watched him the other day. It was such a fantastic job you did, and I really appreciate it.

But they’re going to be answering questions. And we have a lot of new information, so I think you’ll find it very interesting. And I’ll be going back to the Oval Office.

Thank you very much. 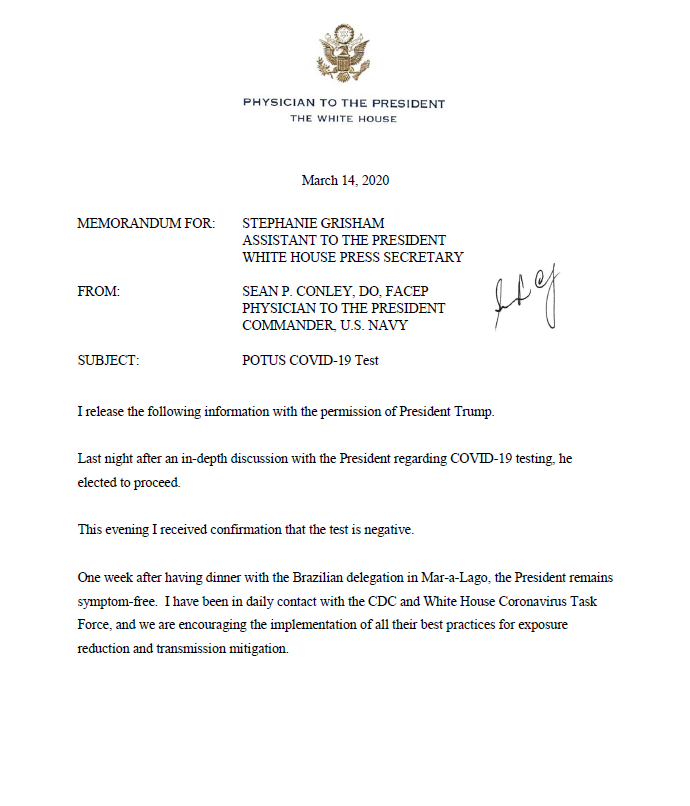 Zachery Schmidt is the digital editor of Star News Digital Media. If you have any tips, email Zachery at [email protected]