Another 4.4 million Americans filed for initial unemployment claims last week, raising the total to more than 26 million who have lost their jobs since the COVID-19 pandemic economic closures began in all 50 states more than a month ago.

But it could be as high as 29 million, since the monthly unemployment report from March showed 3 million Americans had also lost their jobs in March. Those reports are taken mid-month, and so the thinking there is that the job losses that came at the end of the month might have come atop those reported. We’ll have more information next month to look backwards and get a better read.

Add to that the 5.8 million who already were unemployed when the economy was at a 50-year low of 3.5 percent, and that raises the effective unemployment rate to anywhere from 19 percent to 21 percent, with more than 32 million jobless.

Simply put, those numbers are devastating.

For perspective, it took two and a half years to get to 25 percent unemployment in the 1930s as deflation devastated the global economy, four years to get back down to 11 percent, and then not until the U.S. entry into World War II when elevated unemployment came to an end. At the current clip, we could be well north of 25 percent by June when hopefully most states will be reopening, with no guarantees that it won’t just keep on rising thereafter.

In the financial crisis and the Great Recession, it to more than two years to lose 8.3 million jobs, and then almost five years to get those jobs back. 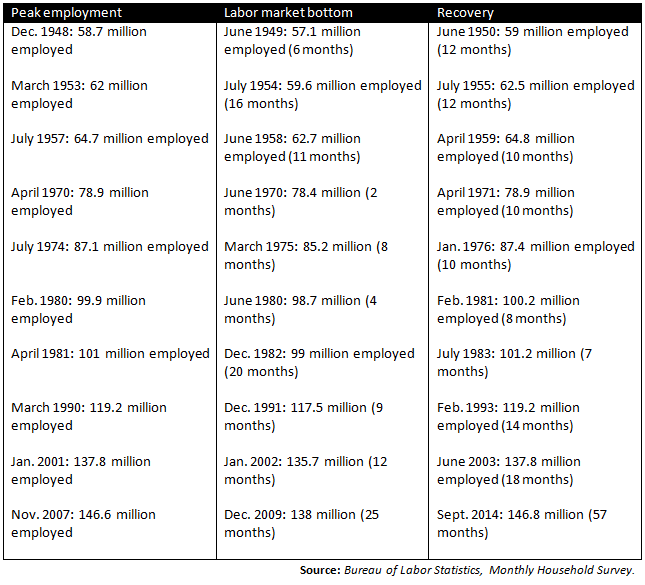 In comparison, therefore, the current recession has already lost three times as many jobs as the last one, with much of the damage already done and yet still more to come. This illustrates clearly the urgency behind Congress’ measures to support small and large businesses, state and local governments with up to $2.7 trillion, to ensure that when the economy does reopen, there is still a private sector left to open.

That is why attention must now be given to what sort of support will be needed not only to keep existing businesses alive, but help build new ones in the fallout of what could be many months or even years of rebuilding. It is to President Donald Trump’s credit that he believes America can come back very rapidly. He is a goal-oriented President and so wants to help drive Americans to achieve all that they can. If only we had had that sort of leadership in the last recession and recovery period.

Specific attention must be given to impediments to the prior recovery. Why did it take so long? Were households simply too indebted? Was the strong dollar and deflation not fully addressed? Were unemployment benefits simply extended for too long, incentivizing people to stay unemployed?

The latter is a particularly vexing problem as we enter this recession. The payroll protection and expanded unemployment benefits were designed to encourage Americans to stay home. That, combined with the threat of the virus and the public’s general willingness to fight it to keep their loved ones safe has worked. But how quickly is it realistic to remove those supports and sustain the recovery?

If that safety net is removed too quickly, the vicious cycle could begin anew, but if it is held for too long, it could stunt the recovery.

Then there is the possibility that no matter what, it will take years to recover, and no amount of tax cuts, deficit-spending and other incentives will change that fact. Just as it is a lot easier to burn a house down than it is to build one, so too bringing back 26 million Americans and counting back into the workforce be difficult.

First things first, we have to stop losing jobs. And so, as states enter the three phases of the federal strategy to reopen the economy, we need to get to the bottom of the labor markets as quickly as possible. So, remove tax, regulatory, financial and monetary disincentives to forming new businesses. Corporate and payroll tax holidays might be a good idea. State and local regulatory holidays could help. In the interim, mortgage payment assistance via a bank debt holiday might be need to stave off another financial crisis. Municipal bond markets will probably need to be temporarily propped up by the Federal Reserve. And the dollar could be weakened relative to other currencies to fight deflation, boost exports and speed the recovery.

This could be the worst recession of our lifetimes and whether we opened right this instant or in a few weeks may not change that fact. What we can have an impact on, though, is whether we can get a rapid recovery, or one that drags on for years on end, without ever fully recovering what was lost. Concerted action will be needed to ensure that it is not the latter.