A recently released document reveals that the state of Minnesota spent $62,000 to develop its controversial COVID-19 model.

The modeling platform in question was developed by the Minnesota Department of Health and researchers with the University of Minnesota School of Public Health. According to a state contract, the government spent $62,881 to pay those researchers. Another $233,000 was spent on conducting a COVID-19 Social Contact Survey.

The contract for the coronavirus model was included as an amendment to the state’s ongoing $1.5 million contract with the university for conducting the Minnesota Health Access Survey.

Minnesota’s coronavirus model has been a source of disagreement among state lawmakers, to put it mildly. Republican lawmakers frequently point out that the model shows little variation in the predicted number of deaths and ICU admissions between four of the scenarios investigated. 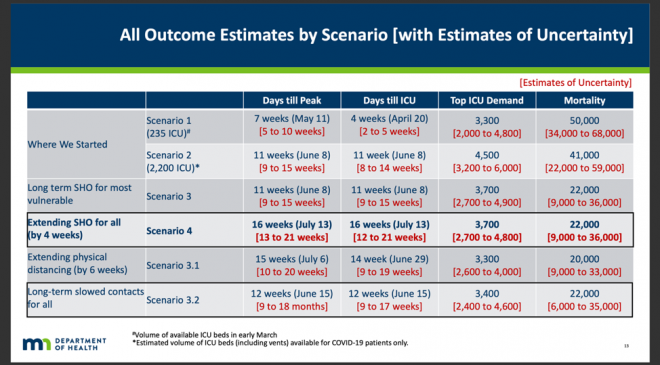 “However, scenario 3.2 allows our economy to re-open significantly earlier than the governor’s current path. The economic pain people are feeling is real, and we need to take reasonable steps to protect the livelihoods, mental health, and rights of Minnesotans as we continue to prepare our COVID-19 response,” said state Sen. Michelle Benson (R-Ham Lake).

The model predicts Minnesota will experience 22,000 deaths over the course of the pandemic, but other models forecast a far lower mortality rate. A model developed by the University of Washington’s Institute for Health Metrics and Evaluation (IHME) thinks that the state will have just 741 coronavirus-related deaths.

As of Thursday, Minnesota had a total of 343 deaths, more than 90 percent of which are associated with long-term care facilities or people with underlying health conditions.

One of the main differences between the two forecasts is that the Minnesota model tracks the full course of the pandemic while the IHME model looks only at a four-month period.

Other lawmakers have pointed out that the Minnesota model relies on “data from early outbreaks in China, Europe, and the U.S.,” but significant questions have been raised about the accuracy of the information put out by the Chinese Communist Party.

Nationally, modeling platforms in general have been questioned by Republican lawmakers, including a group of House Republicans who called for a review of the models used by the government to make projections about the impact of the virus.

“While widely distributed and used by many thought leaders, these models have exhibited conflicting data over time, as well as within comparison of the models themselves,” said a letter calling for a congressional review of the models. “These models have also undergone multiple wildly varying revisions, and have not seemed to account for real world behavioral changes, even demonstrating assumptions at odds with visible data in real time.”