“He signed the death sentence for 38+2 Dakota men hung [sic] because they tried to feed their families days after signing the Declaration of Independence. Tried a bunch of times to get that switched out,” she said.

DFL Rep says she tried to get Lincoln painting removed from chamber, jokingly(?) implies that she wants to call in the group that illegally tore down statue yesterday. #mnleg pic.twitter.com/PDUDT4FOr7

Kunesh-Podein later deleted her initial tweet because she mistakenly claimed that President Lincoln signed the Declaration of Independence. She had the Emancipation Proclamation in mind, she clarified.

In both tweets, Kunesh-Podein said she “better call AIM,” which stands for the American Indian Movement, the group that was responsible for tearing down a statue of Christopher Columbus outside the Minnesota Capitol Wednesday.

The Democratic lawmaker was responding to a tweet from Rep. Sydney Jordan (DFL-Minneapolis), who said the “Capitol building is full of monuments to genocide.”

“From my seat on the House floor I stare at a statue that reinforces white supremacy by proclaiming ‘The Trail of the Pioneers Bore the Footprints of Liberty.’ This sentence is a lie,” said Jordan. 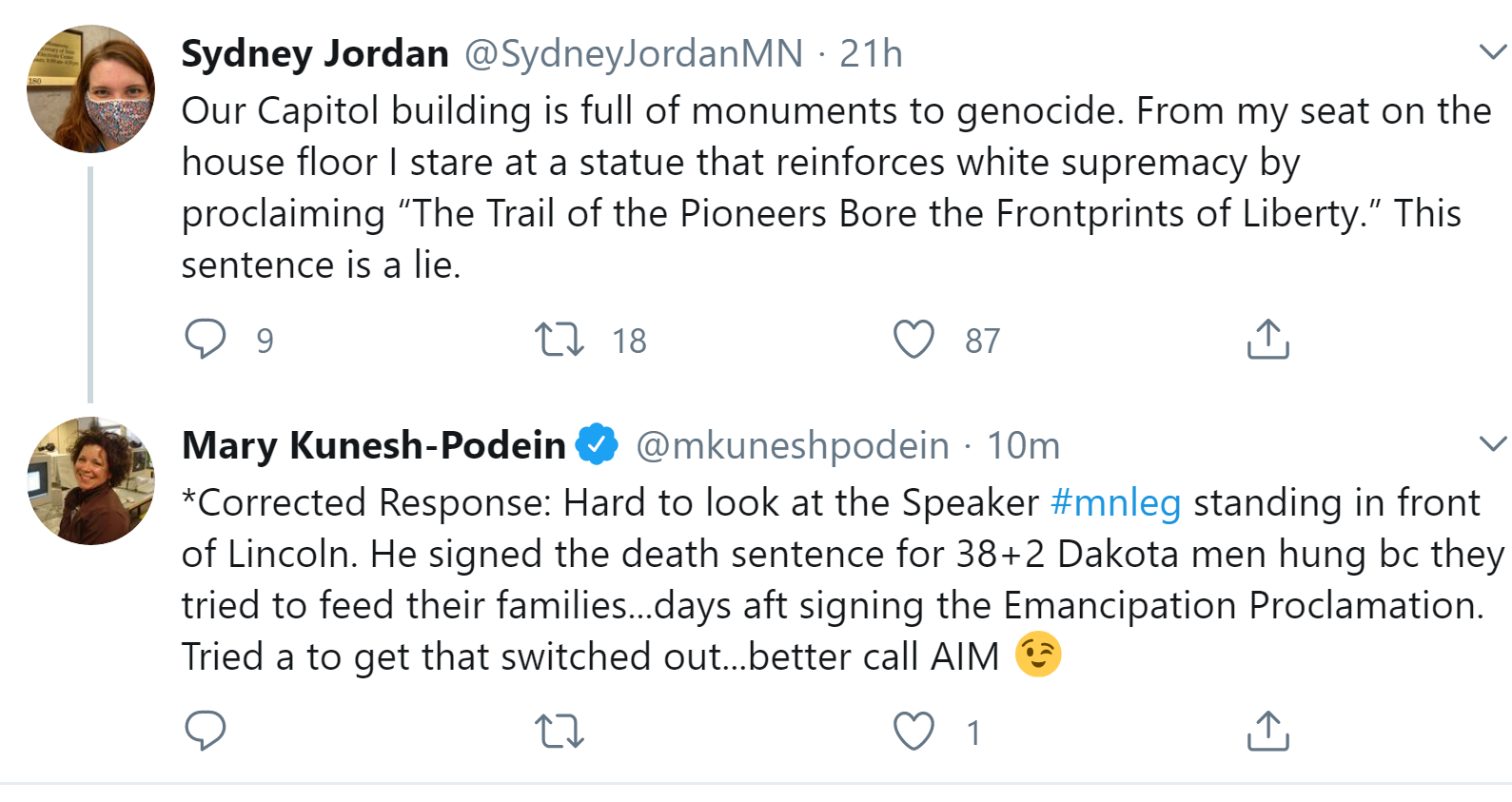 Apart from serving as a state representative, Kunesh-Podein works as a library media specialist at Robbinsdale Middle School.

The portrait of Lincoln was completed in 1931 by artist Edward Brewer and placed in the House chamber in 1932, according to the Minnesota Historical Society.

Historical monuments across the country have been vandalized and destroyed in recent days, including a Columbus statue in Virginia that was set on fire and thrown in a lake, and another in Boston that was decapitated. A century-old statue of Confederate President Jefferson Davis was toppled over and splattered with paint in Richmond, Virginia.

In response to the destruction of the Columbus statue in St. Paul, Lt. Gov. Peggy Flanagan welcomed its removal.