According to the New York Times, one of the main reasons why public K–12 schools are reopening more slowly from Covid-19 lockdowns than private schools is because public schools generally have less money. Times reporter Claire Cain Miller makes this claim three times in a single article, but her assertion is the polar opposite of reality and has been so for decades.

Twenty-five years ago, the U.S. Department of Education (DOE) estimated that public K–12 schools spent an average of 43–52% more per student than private schools in the 1991–92 school year. Since then, DOE data shows that inflation-adjusted average spending per public school student has risen by 40%.

Consistent with that DOE data, new research by Just Facts reveals that average public K–12 school funding per student is about 80% higher than private schools. Specifically, the latest DOE data shows that governments spent an average of $14,439 for every student enrolled in K–12 public schools in the 2016–17 school year. In comparison, Just Facts estimates that private schools spent an average of $8,039 per student in the same year.

The figure for private school spending was determined by Just Facts with data from the DOE and U.S. Bureau of Economic Analysis. All methodological details are provided in the footnotes located here, and all data and calculations are shown in this spreadsheet.

Furthermore, DOE’s figure for public school spending per student doesn’t include the costs of state government administration, unfunded pension liabilities, and public worker post-employment benefits (like health insurance). In contrast, Just Facts’ figure for private schools is comprehensive and includes all spending by private consumers, nonprofit organizations, and governments. This means that the full public school funding advantage is greater than 80%.

Miller doesn’t even attempt to document the following claims that she makes in her article, which is titled “In the Same Towns, Private Schools Are Reopening While Public Schools Are Not”:

She also alleges without evidence that “public schools faced a funding crisis even before the pandemic.” In reality, the latest DOE data shows that inflation-adjusted spending per public school student is at an all-time high and has grown by 20% since 2000, 93% since 1980, and 3.8 times since 1960: 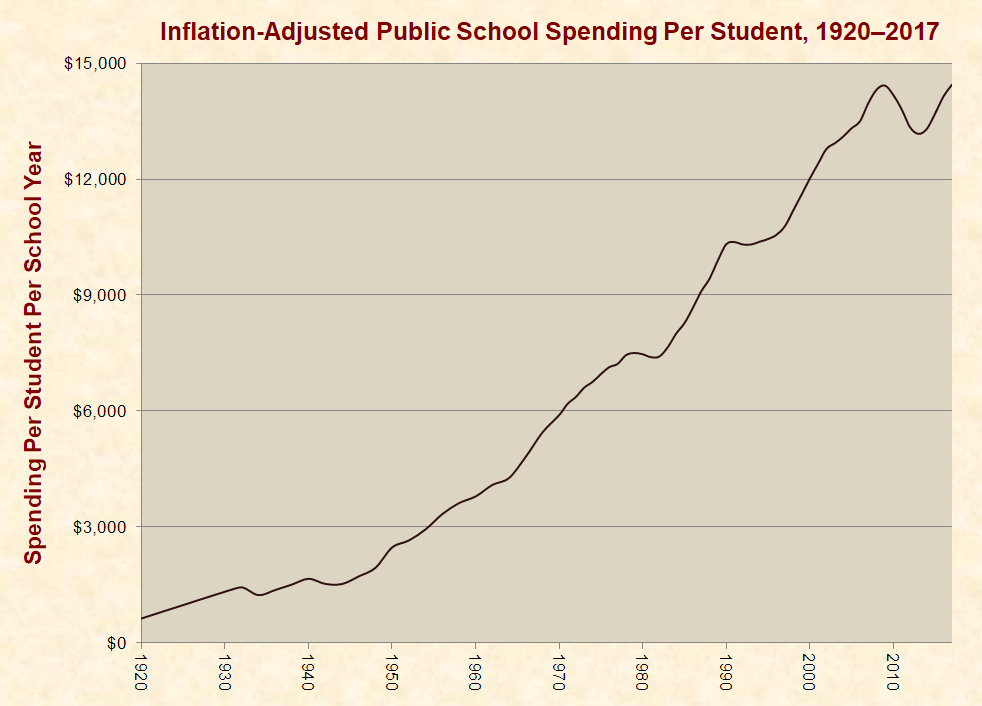 As Bernie Sanders has done, one can make it seem like funding has declined by cherry picking certain years in certain states, but the primary trend has been upwards, not downwards. This applies in nearly every state, which experienced anywhere from a 1% decrease to a 114% increase in inflation-adjusted spending per student between 1996 and 2016.

Miller also gives Robert Pianta, the dean of the school of education at the University of Virginia, a platform to claim without proof that Covid-19 “has exposed a great deal of inequity” in the education system. Less than a year ago, the Washington Post issued a correction for an op-ed by Pianta in which he wrote that “public funding for schools has actually decreased since the 1980s, adjusting for constant dollars.” That statement is at blatant odds with DOE data, which shows that the average inflation-adjusted spending per public school student rose from $10,316 in 1989 to $14,439 in 2016, or by 40%.

Just Facts provided documentation of the facts about public and private school spending to Miller and the Times corrections desk on July 17th. Ten days later, they have not responded or issued a correction. This adds to an extensive list of uncorrected falsehoods published by the Times.