The Minneapolis City Planning Commission voted unanimously Monday evening to add a commemorative sign reading “George Perry Floyd Jr. Place”, dedicating two blocks of Chicago Avenue to memorialize the May 25th killing. If fully approved by the city council, the sign will be placed between 37th Street East and 39th Street East. Along with the recent grant to preserve current George Floyd memorials throughout metro, many other memorial measures are occurring throughout the nation. 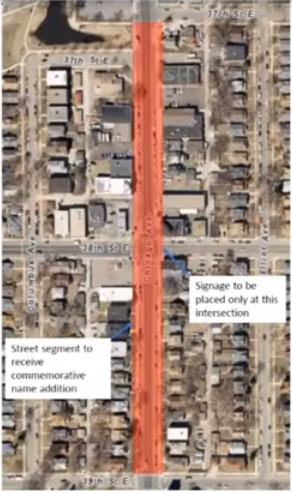 Guest speaker Matt Hanan with Minneapolis Public Works Transportation Engineering and Design introduced the proposal, along with its original applicant: Public Works’ Director Robin Hutcheson. Despite some news coverage that the two blocks along Chicago Avenue would be renamed “George Perry Floyd Jr. Place”, the application only proposes to add a secondary, distinctive sign for Floyd alongside the current street signage.

As for the 38th Street intersection where George Floyd died, Hanan said that the city will not take short-term action to plan a bigger memorial at this time. He added that the city does have $100,000 dedicated to “long-term engagement memorial” that will factor community input.

“I think this is one step in the future of really trying to making amends for some of the challenges that our community has faced in the past,” said City Council member Andrea Jenkins (Ward 8), who sat in on the commission meeting (pictured above).

It is dubious whether a memorial sign will quell the community: the 38th Street intersection and surrounding areas where Floyd died remains in constant turmoil. Even though the site is barricaded to preserve the area as an open street with public right of way, pedestrians only dare to walk the streets during the day.

“What people aren’t recognizing is that people who live there are having a very, very challenging time from the unlawfulness that is occurring after the sun goes down,” said Jenkins this past weekend. “There are constant gunshots every night. Emergency vehicles can’t get in. Disabled people are not able to access their medications, their appointments, their food deliveries, et cetera.”

There isn’t much more that can be done to protect Minneapolis residents, since the number of available police have dropped by around 100 officers – about 10 percent of the force. In an interview with KSTP News, the Minneapolis Police Department (MPD) told victims to simply give in to criminal demands to better their chance of survival.

Minneapolis’s crime rates are surpassing or nearing last year’s counts: so far, 300 people have been shot and 41 have been killed, surpassing the total shot and nearing the 48 homicides for all of 2019.

Even with this data before them, council member Jenkins seemed hopeful about the prospective impact of a commemorative sign.

“It feels like the city is responding to community voice.”

Plans are yet to be established for reopening the barricaded streets, as are any celebratory measures to accompany the commemorative sign. The Bid Committee is scheduled to address this proposal on September 8th, with the potential to go before the full council on September 18th.

Corinne Murdock is a reporter at The Minnesota Sun and the Star News Network. Follow her latest on Twitter, or email tips to [email protected] .