Leading constitutional law scholar Alan Dershowitz spoke during the 2020 National Constitution Bee on Saturday. All contestants had the opportunity to join the video call and ask questions afterwards.

To begin, Dershowitz leaned into a popular argument concerning the Constitution. He stated that the Constitution is both a living and dead document, not one or the other. He used a hypothetical example of Representative Alexandra Ocasio-Cortez (D-NY-14) wanting to run for president – but the Constitution says that she doesn’t qualify due to her age.

“You have to be 35 years old. That is ‘dead.’ There is no way of changing that, other than through a constitutional amendment. But what if the next president were to decide to appoint Congresswoman Ocasio-Cortez to the Supreme Court? He could do that! Even though she’s not a lawyer, and she would be thirty-something years old, he could appoint her because the Constitution says nothing about the qualifications for being a justice to the United States Supreme Court. So, partly alive and partly dead.” 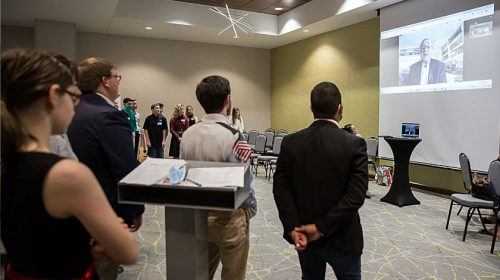 Then, Dershowitz discussed the Electoral College, and whether states could create laws forcing electors to cast their votes aligned with the popular vote. He made the point that Texas electors would’ve had to cast all votes to reflect the popular vote for Hillary Clinton in 2016.

On the topic of the presidency, Dershowitz asked if the impeachment provision in the Constitution is alive or dead. He argued that it is dead, because it definitively lists treason, bribery, or other high crimes and misdemeanors as the grounds for impeachment. He argued that the word “other” indicates crimes that are similar to treason and bribery.

Then, Dershowitz discussed the meaning of “equal protection under the law” in its original context.

“Equal protection is living. Due process of the law is living. Cruel and unusual punishment is living. Those are phrases that need to be interpreted – the realities of interpretation are open to dispute. But you’re not bound by the dead hand of the law. One of the reasons our Constitution has endured more than any constitution in the history of the world – it’s the longest living, enduring constitution in history – is because it is both dead and living. It is because it has provisions in it that are unchangeable.”

An additional point he made concerned the length of Supreme Court justice terms. Dershowitz opined that there should be an amendment to change the language from “good behavior” in order to set explicit term limits.

Overall, Dershowitz stated that the biggest issues are determining which of the constitutional provisions are living and how alive they are, and the allowable levels and modalities of interpretation.

The analysis was decisively nonpartisan as Dershowitz critiqued both parties for their attempts to use the court for backing partisan interests.

Near the end, contestants were given the opportunity to ask questions of their own.

Contestant Benjamin Barry asked Dershowitz about his thoughts on lifetime appointment for justices. Dershowitz stated that the framer’s intent when drafting the constitution was to have “lifelong” appointments – but at that time, justices were usually appointed in their 40s and the average individual lived into their 50s.

Rather than age limits, Dershowitz stated that justice terms should have a span of 18 or 20 years.

“I don’t like age limits. Let me tell you why: let’s assume the age limit were to be 72, as it is for the Israel or Canadian Supreme Courts. That just incentivizes the presidents to pick younger and younger people. At the age of 72, they’re going to pick someone at 35.”

Dershowitz added that term limits for presidency weren’t in the original Constitution. The amendment only came about when President Franklin Delano Roosevelt ran for a fourth term.

Dershowitz shared that it was difficult and strained some of his friendships. He added that his role wasn’t to defend Trump – it was to defend the office of the president.

“If you’ll notice, I did not mention the word ‘Trump’ in my entire hour and seven minute presentation in the Senate. Because I was there defending the presidency of the United States against unconstitutional provisions of the House impeachment. They impeached him on two grounds that are not included in the Constitution: obstruction of Congress and abuse of power, which almost every president can be accused of.”

Dershowitz added that he didn’t develop a relationship with Trump: he only met the President a few times in preparation for the trial and spoke once afterwards. He remarked that he’d also defended President Bill Clinton during his impeachment.

“Had Hillary Clinton been elected president and had she been impeached – which she probably would’ve been – I would’ve represented her as well.”

As a gesture of thanks, The Tennessee Star Report host Michael Leahy invited Dershowitz to have dinner with the contestants. Dershowitz promised to come after the pandemic ends.

Corinne Murdock is a reporter at The Tennessee Star and the Star News Network. Follow her latest on Twitter, or email tips to [email protected].
Image “Alan Dershowitz” by C-Span.org.