In 2017, Hunter Biden and a group of business partners seeking a $10 million investment deal with a Chinese energy firm touted Joe Biden’s friendly relations with Colombia’s president in their sales proposal, which suggested a series of oil investments in the South American country, according to documents obtained by The Daily Caller News Foundation.

Hunter Biden and four other businessmen, including his uncle James Biden, highlighted the former vice president’s positive relationship with Juan Manuel Santos in a May 15, 2017 investment outline for CETC China Energy, a Chinese energy conglomerate.

The Biden consortium, which would be called SinoHawk, sought a $10 million seed investment from CETC China Energy, with a goal of eventually securing billions of dollars in investments in the U.S. and around the world.

The report is part of a trove of records held by Tony Bobulinski, a California-based businessman who was part of the consortium with Hunter Biden, James Biden, and two other partners.

Bobulinski has provided the documents to a Senate committee investigating Hunter Biden’s business dealings. He said at a press conference last week that the records show that the Bidens “aggressively leveraged” their family name to secure foreign business deals.

Bobulinski also said that he met with Joe and Hunter Biden in early May 2017 to discuss the Chinese deal. Joe Biden has long denied discussing business with his son.

The Bidens’ involvement in the partnership was a key selling point to CEFC China, according to other documents obtained by the DCNF. But the 42-page investment outline is the only document from Bobulinski’s records that explicitly touts Joe Biden contacts with foreign leaders.

The investment outline, which is marked “Sensitive and Confidential,” mapped out prospective investment opportunities for CEFC China Energy in Oman, Romania, Luxembourg and Colombia.

A section of the sales proposal entitled “Colombia — Gateway to Latin America,” features a photo from Dec. 1, 2016, of then-Vice President Joe Biden shaking hands with Santos, who served as president of Colombia through 2018.

“The relationship between Colombian president Juan Manuel Santos and Joe Biden has been a strong one throughout the Obama administration,” reads the document. 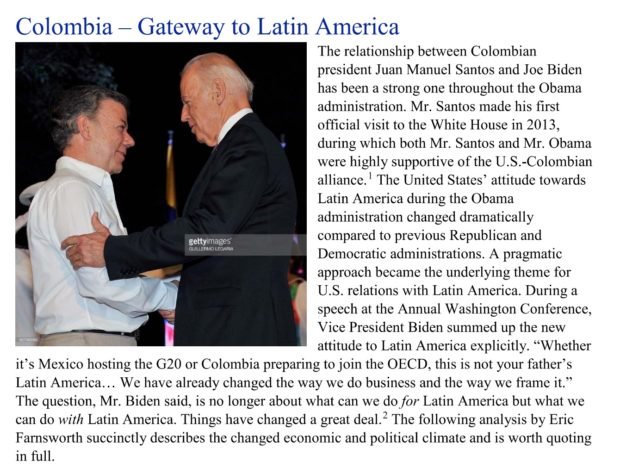 The investment prospectus highlights Biden’s positive remarks about U.S.-Colombia relations and economic reforms in Colombia that he said made the Latin American country an attractive investment option.

“With this in mind, EEIG has built he [sic] framework for partnership between CEFC China and local partners in Colombia, with a solid basis starting at the very foundation of the country’s administration,” the document says.

EEIG is a company operated by one of SinoHawk’s partners, James Gilliar.

“Mr. Biden pledged his strong personal support of the peace process and offered congratulations to Mr. Santos while underscoring ‘the importance of maintaining bipartisan support for Colombia in the United States Congress,’” the investment outline says.

Several “target opportunities” for the SinoHawk-CEFC partnership are identified in the document.

A Colombian oil field owned by a company called Rattan Holding is proposed as a potential investment. The SinoHawk team also flagged an investment in the Buenaventura port on the Pacific Ocean, asserting that the port could be “very attractive” to CEFC because it would allow the company to avoid having to ship goods through the Panama canal.

The outline also suggests an investment in a pipeline that would ship oil from Venezuela, which has since come under U.S. sanctions.

“We have a great project to bring an oil pipe from Venezuela to this port to fill huge tankers that can’t go through Panama Canal,” the sales pitch reads.

CEFC China Energy ended up not partnering with SinoHawk. Bobulinski’s records show that the prospective deal fell apart by August 2017 after CEFC failed to wire a $10 million startup investment that it had pledged to make in May 2017.

The Chinese firm did however strike a deal with Hunter and James Biden.

A Senate report regarding Hunter Biden’s foreign business dealings released on Sept. 23 said that CEFC affiliates wired $5 million to Hunter Biden’s law firm over the course of a year beginning in August 2017.

The report said that some of the wire transfers were flagged by banks for potential criminal financial activity.

The Senate report also said that Biden’s partnership with CEFC posed an extortion and counterintelligence risk because the firm’s chairman, Ye Jianming, has ties to the People’s Liberation Army and the Chinese Communist Party.

Bobulinski said last week that he was unaware of the Bidens’ side deal with CEFC China Energy. He sent James Biden a text message on Sept. 24 accusing him and his nephew, Hunter, of lying about the partnership with CEFC. 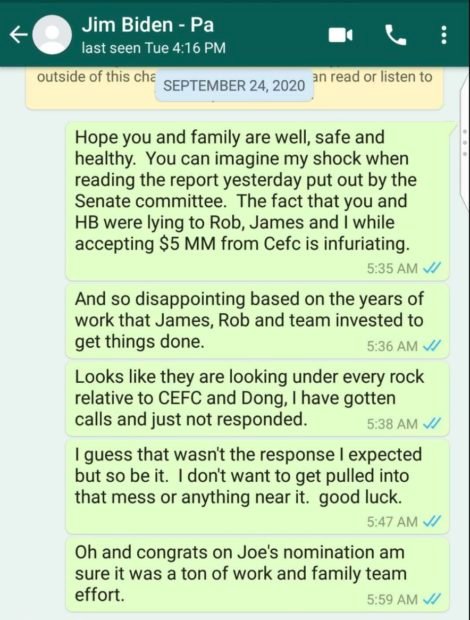 Bobulinski has provided his records to the Senate Homeland Security and Government Affairs Committee (HSGAC), which wrote last month’s report with the Senate Finance Committee.

Bobulinski also met with the FBI on Friday, according to Sen. Ron Johnson, the chairman of HSGAC.

Bobulinski disputed Joe Biden’s longstanding denial that he has ever discussed business with his son.

“I have heard Joe Biden say he’s never discussed business with Hunter. That is false,” Bobulinski said at a press conference on Thursday. “I have firsthand knowledge about this because I directly dealt with the Biden family, including Joe Biden.”

Text messages from Bobulinski’s trove of records show Hunter Biden setting up a meeting for Bobulinski and Joe Biden on May 2, 2017 in Los Angeles. Bobulinski said last week that he talked with the Bidens about the plans for business in China, and that Joe Biden was familiar with those plans at “a high level.”

Hunter Biden suggested to Bobulinski in a text message a day before the meeting that their partnership with CEFC should involve the use of a U.S.-based company in order to avoid registering as a foreign agent.

One email from Bobulinski’s trove of documents suggests that Joe Biden was initially intended to have an equity stake in the partnership with CEFC.

In a May 13, 2017 email, James Gilliar laid out the planned equity stake for all the investigators. He, Hunter Biden, Bobulinski and another partner, Rob Walker, were supposed to receive 20% equity apiece in the partnership.

The remaining 20% was to be divvied up between James Biden and “the big guy,” the email shows.

Bobulinski said that “the big guy” was a reference to Joe Biden.

A spokesman for the Biden campaign denied last week that Joe Biden had any business dealings with his son.

“Joe Biden has never even considered being involved in business with his family, nor in any overseas business whatsoever. He has never held stock in any such business arrangements nor has any family member or any other person ever held stock for him,” Biden campaign spokesman Andrew Bates in told The Wall Street Journal.

An attorney for Hunter Biden has not responded to requests for comment.

Chuck Ross is a reporter at Daily Caller News Foundation.
Images “Biden with Columbia President” and “Biden Texts” by DCNF.