One of the most highly-anticipated moments of ex-cop Derek Chauvin’s trial came Monday when Minneapolis Police Chief Medaria Arradondo took the stand for the state.

Chauvin’s former boss testified at length on the Minneapolis Police Department’s training protocols, use of force and de-escalation policies, and his work history in the department.

“The goal is to resolve the situation as safely as possible. So you want to always have de-escalation layered into those actions of using force,” Arradondo said. 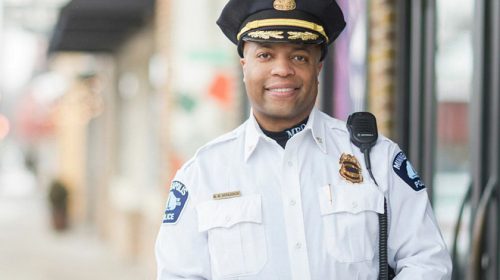 The first African American to serve as chief, Arradondo (pictured left) started his law enforcement career as an MPD cadet in 1989. He went on to serve in various leadership positions before being promoted to chief in 2017.

The prosecution presented an MPD policy on individuals in crisis, which requires officers to respond “in a manner that reflects the values of protection, safety, and sanctity of life.”

“We want to meet people where they are. We want to bring our values and our principles to those situations. We recognize that oftentimes people who are experiencing crisis, it is not something they brought on themselves but they’re dealing with, and so there’s a sense of dignity and respect that we should be honoring when we come to those calls,” Arradondo said.

The chief said use of force is “the one singular incident” his officers will be “judged forever on,” which is why “sanctity of life” is the “pillar” of the MPD’s policy.

Arradondo agreed neck restraints were “taught and authorized” as of May 25, 2020, when George Floyd died in Chauvin’s custody.

Then came Arradondo’s most damning comments.

“Once Mr. Floyd had stopped resisting, and certainly once he was in distress and trying to verbalize that, that should have stopped,” he said.

“To continue to apply that level of force to a person, proned out, handcuffed behind their back, that in no way, shape, or form was anything that is by policy, it is not part of our training, and it is certainly not part of our ethics or our values,” he continued.

Minneapolis Police Chief Medaria Arradondo testifies against Derek Chauvin and says his restraint of George Floyd was not in line with department policy. #DerekChauvinTrial pic.twitter.com/Qc5oqvO5wc

Perhaps the most successful moment of defense counsel Eric Nelson’s cross examination came when he introduced the “concept of camera perspective bias,” showing bystander video of Floyd’s arrest alongside body-camera video of the incident.

Chief Arradondo agreed that Chauvin’s knee appeared to be on Floyd’s shoulder blade, not his neck, in video captured on former officer Alexander Kueng’s body-camera.

Defense counsel Eric Nelson discusses the concept of "camera perspective bias." Arradondo agrees that Chauvin's knee appears to be on Floyd's neck in the bystander video, but appears to be on his "shoulder blade" in the body-cam video. (Content may be disturbing to some viewers) pic.twitter.com/WxURy8nytS

The state responded by arguing that Chauvin’s knee was placed on Floyd’s neck up until the final moments of the incident.