FRANKLIN, Tennessee — Arizona State Rep. Mark Finchem (R-District 11) told a group of nearly 100 gathered in middle Tennessee that it has been revealed that our elections have been open to manipulation and for much longer than we knew, long before November 2020.

Finchem said that “while many might think it’s a curse, America has been given a gift.” 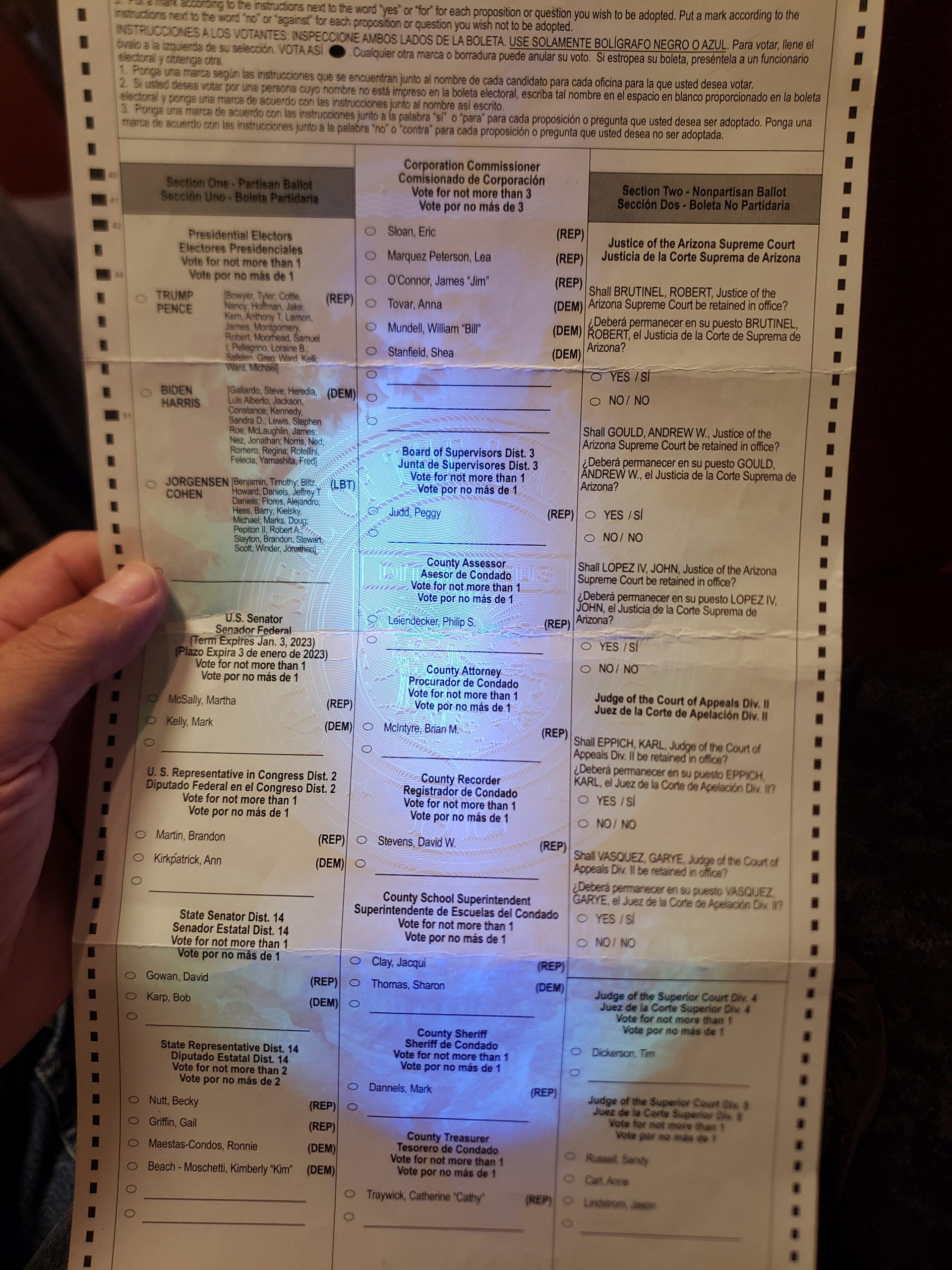 “Had the puppet masters not miscalculated in their manipulation of elections on such a massive scale, and had they not had such a bitter hatred for Donald J. Trump, we might never have known about the pervasive, systemic failures of election systems that we trusted to deliver free and fair elections. That, my friends, is the gift,” said Finchem.

Finchem is the Arizona House member who spearheaded the investigation into Maricopa County’s November 2020 election, which began with a 10 ½ hour hearing held on November 30, 2020, the video for which is remarkably still available on YouTube.

Finchem was invited to speak at the Nashville Sentinels‘ monthly meeting by member Wendi Mahoney who told the group during her introduction that she met Finchem while covering CPAC (Conservative Political Action Conference) for UncoverDC.

Middle Tennessee members of the General Assembly were invited to attend the event, given the attention that the issue of election integrity has received on both the state and national level. Two legislators able to attend were Rep. Scott Cepicky (R-Culleoka) and Sen. Jack Johnson (R-Franklin), who is also the Senate Republican leader.

Because of the hundreds of emails and phone calls Finchem received daily from November 4 on, he requested authorization to hold a public hearing on election integrity at the House of Representatives.

Finchem was never granted the authorization by Arizona’s Speaker of the House.

“Never.  To this day, not even acknowledged,” Finchem told the group.

As a result, Finchem and his colleagues decided to go off-site to give the public the hearing that they wanted and deserved.

“Seemed like a simple enough ask,” said the straightforward Finchem.

The objective of the hearing was to create a venue for an impartial hearing of evidence from the Rudy Giuliani legal team and constituents who had been asking for a hearing.

According to the seasoned criminal investigator with 21 years’ experience, the hearing generated evidence.

And, Finchem said of that evidence, “If the evidence we were able to collect wasn’t clear and convincing, I don’t really know what is.”

In a burden of proof pyramid, clear and convincing evidence is positioned fourth of five levels, with the fifth level being the highest “beyond a reasonable doubt” standard, according to the description and a visualization by Varghese Summersett.

As a result of the November 30 hearing, the Arizona Senate Judiciary Chairman held a hearing giving the Maricopa County Board of Supervisors the opportunity to testify.  From that six-hour hearing came the subpoenas for the Maricopa County election ballots and machines.

Then came the “endless lawsuits,” Finchem said after the chairman of the County Board of Supervisors initially said they want transparent elections and to cooperate.

“Five minutes after the gavel dropped, they lawyered up,” remarked Finchem.

Finchem said they knew time was of the essence:  It was December 14 and they had until January 6 to produce evidence.

“It was clear that the audit would be stalled by legal challenge after legal challenge,” relayed Finchem regarding the situation at the time.  “It became clear that someone would have to take bold action and deliver evidence to Vice President Pence for inclusion in the congressional record.”

Finchem paused to recognize U.S. Representatives Andy Biggs (R-AZ-05) and Paul Gosar (R-AZ-04).  “They are patriots,” said Finchem.  It was Biggs and Gosar to whom Finchem delivered a notebook of evidence on January 6.

“Many of you will remember January 6, 2021. It was called many things, most of the descriptions are inaccurate.  But my remarks about that day must end here, because there is ongoing litigation over the events at the Capitol, in particular, and they involve me.  But I can say this:  Even CNN has admitted that Antifa and BLM were behind the Capitol incursion, not American patriots.”

An effort to recall Finchem from his House seat has been initiated by a group named Rural Arizonans for Accountability (RAZA), the main issue behind which is Finchem being in Washington, D.C. on January 6.

Finchem fast-forwarded to April 14, the day “America’s audit” began, crediting Arizona GOP Chair Kelli Ward for the name.  Finchem added, though, that with IP addresses coming from all over the world – Japan, Australia, Indonesia, Brazil, France, Great Britain, Finland – “they are watching what is going on in Maricopa County.”

While the Maricopa County Board of Selectman claimed in the media that they performed two audits, “This was not a truthful statement,” Finchem advised.

Finchem then contrasted the current ongoing audit, calling it legitimate and forensic.

One startling and all but ignored revelation from the audit is that the election officials did not possess the administrator password for the Dominion equipment.

Adding perspective to that finding, Finchem said, “That means that Dominion may have exercised ultimate control over an election, not the county recorder.  This is one fact appreciated by only a few, and points out a violation of federal law that nobody seems to want to talk about.”

A repeated question and theme throughout Finchem’s talk was related to those who oppose the Maricopa County audit.

At one point, Finchem put it this way:

“Doesn’t it seem reasonable that if the Democrat Party is so convinced that the election was legitimate, that they would embrace the audit as a means to prove their win?  This is a question that is bubbling up, I think, on the minds of the majority of Americans:  As much as you hated Donald Trump, why wouldn’t you just want to dance in his face that this audit proved it?”

Instead, actions of those opposing the audit speak volumes, including the $1 billiion Clinton- and Democratic Party-representing Perkins Coie law firm and the 70 to 100 attorneys, Finchem estimated, that have descended upon Maricopa County.

Finchem says they have seen every attempt possible to stop the Maricopa County forensic audit and to malign and marginalize qualified professionals.

This is a play right out of Saul Alinsky’s “Rules for Radicals,” Finchem said.  “You malign and marginalize the people who are doing the work, so that you can impugn the result.”

In parallel to the audit, which is under the Senate’s purview, other avenues are being pursued by the House, or as Finchem put it regarding their role, “a public policy organization.”

As part of the 197 legislative proposals in 2021 legislative sessions across 39 states as of just May 14, according to Ballotpedia, Arizona legislators have submitted several bills of their own.  While Finchem wasn’t sure how many of them would make it through the “sausage machine” of law making, he did mention that there were other initiatives underway.

Specifically, Finchem presented a concept for a secure paper, mail-in ballot, which is a method taken advantage of by about 80 percent of Arizona voters.

Finchem passed around a sample of the concept ballot produced by Authentix, a company specializing in comprehensive authentication programs, that included a number of security features, including a Mylar insert in the paper, a full-page watermark and serialized numbers for the ballots.

Finchem excitedly shared the potential future-state with these ballots in use and a back-end app that would allow the voter to track their ballot through the process with elections officials and confirm that their ballot was counted and recorded accurately to the way they filled it out.

In light of the approximate $5 million cost for the current audit, an amount the Senate was not prepared to spend, another Finchem initiative is to set aside additional funding in the budget for future audits.

On a more personal level, Finchem talked about the Guardian Defense Fund whose mission is “to defend champions of free and fair elections from false and defamatory attacks, and to challenge Big Tech censorship in the Courts,” according to the organization’s website.

Finchem has decided to pursue the office of Arizona Secretary of State, where he would replace Katie Hobbs who has repeatedly referred to the audit undertaken by the state Senate as #fraudit.

People come from all over the country to work, raise families, and retire in Arizona. It's the best state in the union.

But this #fraudit is undermining confidence in our elections. It's making Arizona a national joke. It's bad for our brand, and bad for business.

While acknowledging he is accepting campaign contributions, “I also ask that you pray for us,” emphasized Finchem, whose wife was also in attendance.

“Prayer is even more important in this battle,” Finchem continued.  “We are battling the principalities of darkness.  This is a battle of good and evil.  What is stunning to me is how closely aligned with the darkness that the Democrat Party has become and how they react violently to light.”

“For those who don’t believe that we could see a civil war in this county, I would submit to you that we already have a kinetic civil war going on right now:   Minneapolis, Seattle, Portland.  We have shots fired against the government.  These are insurrections.  That is civil war.  That is what it looks like today.  So, if we don’t draw the line and protect states like Arizona and Georgia and Michigan and Pennsylvania and Wisconsin and Nevada, you won’t have a republic.”