The other bill, HF2204, or the Unilateral Emergency Powers Repeal Act, was authored by Representative Erik Mortensen (R-MN-55B), and Munson Representative Steve Drazkowski (R-MN-21B), Representative Tim Miller (R-MN-17A), and Representative John Poston (R-MN-09A). This bill was first brought forward in March, but according to Action 4 Liberty President Jake Duesenberg, it was later not supported in the legislature by some of the same lawmakers who signed it.

In a comment to The Minnesota Sun, Mortensen wrote that his bill is different from Munson’s HF28 bill in that his bill, HF2204 “removes the Governor’s ability to unilaterally declare an emergency and shifts the declaration powers to the legislature. And [the] bill requires a 2/3 vote of both legislative bodies to declare and extend an emergency; making sure no future emergencies can be politicized like COVID has been.” 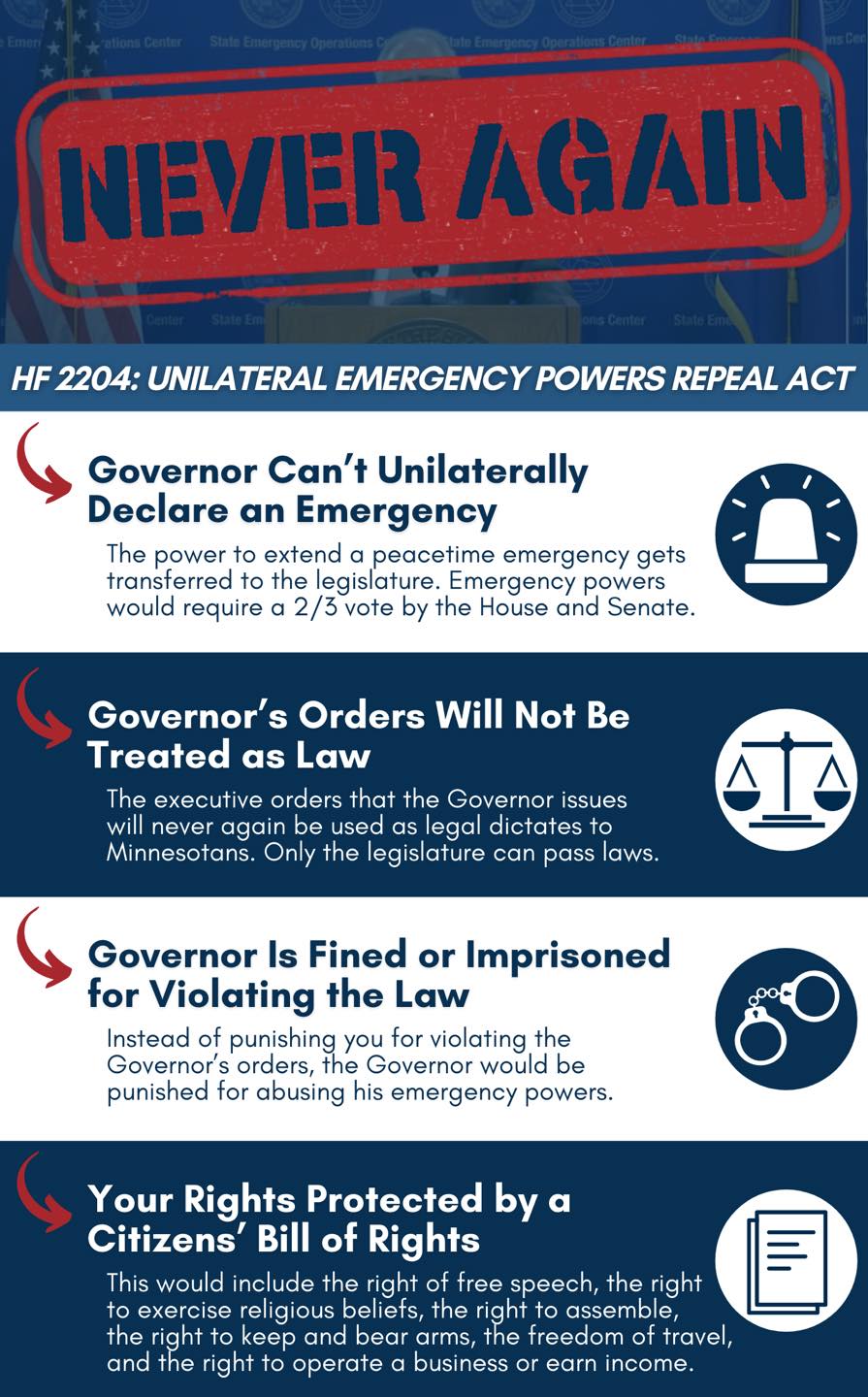 Mortensen went on to say that Munson’s bill, HF28, is a “Fake Never Again bill” that “still allows the governor to unilaterally declare emergencies and it only requires a simple majority vote to extend an emergency.”

In an interview with The Sun, Munson shared that while he did sign on to Mortensen’s bill, HF2204, there were some issues that he saw with the bill as it was written. The bill that Munson authored used language from HF2204 and concepts from a bill passed in 2002. According to Munson, Republicans passed a bill with similar concerns in 2002 but it was given a 3 year expiration date.

Munson explained that his bill, HF28, is different in that it draws a distinction between different emergencies like natural disasters or riots or public health crises. Munson said Mortensen’s bill requiring the legislature, not the governor, to declare an emergency goes against federal laws and in doing so would make Minnesota ineligible for certain federal assistance in the case of a state of emergency.

Munson said Mortensen is welcome to sign on to HF28 and help them to advance the bill to ensure that a Minnesota governor taking advantage of a public health crisis doesn’t ever happen again.

Jake Dusenberg, the president of Action 4 Liberty, shared in an interview with The Sun that there are two major problems with Munson’s bill. One is that the governor can still declare an emergency and the other is that Munson’s bill only requires a simple majority to extend emergency powers.

He said that he does not believe Munson’s bill will go through the committee process and that writing this bill seems like “a petty thing to do.” When asked why Mortensen did not introduce his bill HF2204 in the Special Session on Monday, Dusenberg said that “It’s almost irrelevant to have a Bill in the Special Session.” Duesnberg said that the Never Again protest that was held on Monday was to prompt State Senator Paul Gazelka (R-MN-09) to get the wheels going with regards to the language of the bill.

Margaret Martin, the research and staff coordinator for the New House Republican Caucus, said in a comment to The Sun that “it’s important to point out that there aren’t just two bills on reforming emergency powers. There were 17 bills offered, either ending the peacetime emergency or reforming emergency powers in some way or both, in the regular 2021 session, of which HF2204 was one. There have been four bills offered in the 2021 1st Special Session, of which HF28 is one. There will probably be more. HF2204 can’t be taken up to be voted on right now because it hasn’t been introduced in this special session yet. It will get another number if it does. The first emergency powers reform bill was HF101, authored by Rep. Steve Green.”

Martin also said that, “It’s worth noting that in no states is there a legislative process for declaring an emergency and the federal disaster process begins with a request from a governor.” She explained that while HF2204 takes away the power from a governor entirely, HF28 “significantly reduces his power to declare emergencies and stops his ability to write law.”

Hayley Tschetter is a reporter with The Minnesota Sun | Star News Network and The College Fix. She graduated with a degree in Communications from the University of Northwestern-St. Paul. Send news tips to [email protected]