Bobby Cyrus recalled, “We grew up in a musical family. At family get-togethers, people sit around, play music, and sing.”

The reunions included the Cyrus family cookouts, gathering around campfire jams, picking and singing well into the evening. 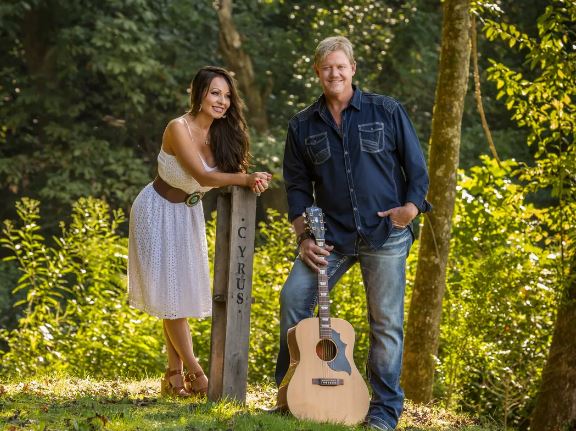 Bobby Cyrus said his father, Bobby “Bob” Glenn Cyrus, influenced him as an artist and songwriter more than anyone else. Even though he didn’t play an instrument, the coal miner wrote song lyrics, poetry, and even plays.

Besides his family, Bobby Cyrus credits Waylon Jennings, Ricky Skaggs, Larry Cordle, Kris Kristofferson, and Keith Whitley among his professional influences, as well as the one individual that has had a particularly profound and personal impact in Cyrus’ life: the legendary Tom T. Hall.

The story of how Bobby Cyrus and Tom T. Hall met is fascinating. It was near the end of Bob Cyrus’ life when he approached Hall about cutting a demo recording of one of the songs his father had written nearly two decades before. Hall graciously obliged, and a friendship was born that resulted in Bobby Cyrus writing for the iconic songwriter’s publishing company, Good Home Grown Music, for many years.

Teddi Leigh Cyrus also grew up in the hills of East Kentucky. She first began singing with her family in her grandfather, Teddy Shannon’s church. She came by her talent honestly, with her mother being both a pianist and vocalist, and her father is a multi-instrumentalist. She learned to play piano, banjo, and bass, by ear alone.

Teddi Cyrus was only 12 years old when she landed a spot with the Jenny Wiley Theatre where she went on to perform in countless productions. It didn’t take long for Teddi to capture the attention of the Kentucky Opry where she still is a favorite performer. (Her rendition of “How Great Thou Art” is not to be missed.)

It was only natural that Teddi Cyrus and Bobby Cyrus would eventually run into each other on the music circuit and they often performed together at the Cyrus Family Theater in Pigeon Forge. They married in 2015 and have continued performing together ever since.

Teddi Cyrus confirmed, “Ever since we met, we have jelled together in every way. I think it is definitely a God thing. We are so good together and we’re best friends are a great married couple. Music has even brought us closer together because we are so passionate about it. It’s part of our life and doing it together has been amazing.”

I met Teddi Cyrus and Bobby Cyrus backstage at the Grand Ole Opry when Billy Ray Cyrus brought them for their Opry debut. They sang the song “Roll That Rock” with their famous cousin.

I was moved because it reminded me of the songs I heard at my grandmother’s church in Southern Illinois. I thought, “How have I never heard this gospel song before?”

I didn’t realize that it was an original track that Bobby Cyrus and Billy Ray Cyrus had penned.

Bobby Cyrus explained, “‘Roll That Rock’ started as a collaboration between Billy Ray and I as writers. Then it became a collaboration of my wife Teddi Cyrus’ powerful vocals, Billy Ray’s undeniable sound, and me.”

Teddi Cyrus added, “‘Roll That Rock’ is an inspiring and beautifully written song about the sacrifices Jesus made for us to have eternal life. This song is powerful and will move your soul. I pray that it blesses all listeners as much as it has me.”

She advised, “Both of us grew in churches with the same music on the line of ‘Roll That Rock.’ It’s completely from your heart and you can feel it.”

Other original bluegrass/gospel songs they have recorded include “Preachin, Prayin, Soul Savin’ Man” and “My Wedding Day” where Teddi Cyrus’ clear vocals shine as they effortlessly sing harmony.

Gospel and bluegrass go hand in hand and Teddi Cyrus’ soaring vocals on the song “I Pray” take the heartfelt duet to the next level.

Bobby Cyrus confirmed, “Today I was driving down the road listening to ‘I Pray’ and cried all the way through it because it speaks to my soul.”

Bobby Cyrus is also known for a book he penned, called “Send Me Wings.” The fictional book was also turned into a movie has won several awards.

The book came to be one because one night Bobby Cyrus was talking to Billy Ray Cyrus a few years back. A major network had wanted him to do another movie. As they caught up, Billy Ray Cyrus said, “I want that movie to be about that song you wrote, ‘Send Me Wings.’ He loved that song from the first day he heard it. He was adamant about it. He wanted to me turn it into a book.”

Bobby Cyrus insisted he was a songwriter, not a book or movie writer.

Billy Ray Cyrus retorted, “Google it, you’ll figure it out.”

Drawing inspiration from his father’s Christmas plays, eight months later, he completed the book. Eventually, the book was published, and shortly thereafter a short film was made about it.

While gospel music will always be an integral part of their repertoire, their next project will have a more secular bent. Regardless, the music will speak to you as bluegrass often does.

Bobby Cyrus explained, “All of our music is going to speak to you, whether it be a life message or an experience in life that speaks to us or family, home. We got some stuff that is a little crossover to country.”

He clarifies, “The country music that I started on is still very much alive and well. It’s just found in bluegrass and Americana.”

He continues, “I love that Bluegrass has evolved to the point where it’s OK to throw a piano in there every now and then and maybe even some drums. As long as you don’t get too crazy, they are OK with it.”

Soon, the duo will be releasing a song called, “Love Slips Away,” that Bobby Cyrus wrote along with a full album later on this year.

Whether it be gospel, bluegrass, or even county, if you want heartfelt music that touches your soul, make sure to listen to and stream anything that Teddi Cyrus and Bobby Cyrus put out.