House Pro-Life Caucus Co-Chair Rep. Chris Smith (R-NJ) and Sen. Mike Lee (R-UT) led 69 members of Congress in a letter Friday that calls on Attorney General Merrick Garland to “conduct a comprehensive investigation” into the deaths of five late-term babies, apparently aborted in Washington, DC, to determine whether federal crimes were committed by the abortionist.

Following a pro-life group’s gruesome and shocking discovery of the bodies of five late-term babies, who were reportedly about to be carried off by a Curtis Bay Medical Waste Services truck in order to be incinerated for “energy,” the federal lawmakers wrote to Garland, alerting him experts who viewed photos of the babies suggest “some of these babies may have been victims of partial-birth abortion or infanticide.”

“We are gravely concerned by allegations brought forward that suggest a preborn baby underwent a partial-birth abortion at the Washington Surgi-Clinic in Washington, D.C.,” the letter read. “We demand that you conduct a comprehensive investigation on the circumstances surrounding the deaths of each preborn baby.”

The lawmakers continued to address Garland:

In one picture, a preborn baby girl is believed to be a victim of partial-birth abortion. Dr. Kendra Kolb, a neonatologist, estimates that this baby girl is “somewhere between 28-30 weeks gestational age, with evidence of deep lacerations to the posterior neck which presumably correlates to the method of abortion used to end her life.”

In a letter led by Sen. James Lankford (R-OK) Tuesday, more than 20 members of Congress wrote to Washington, DC, Mayor Muriel Bowser (D) and Police Chief Robert J. Contee III, to demand “a thorough investigation,” including “autopsies,” into the deaths of the five infants allegedly aborted in the clinic operated by Cesare Santangelo.

Lankford tweeted a response to that first letter from Bowser (D). 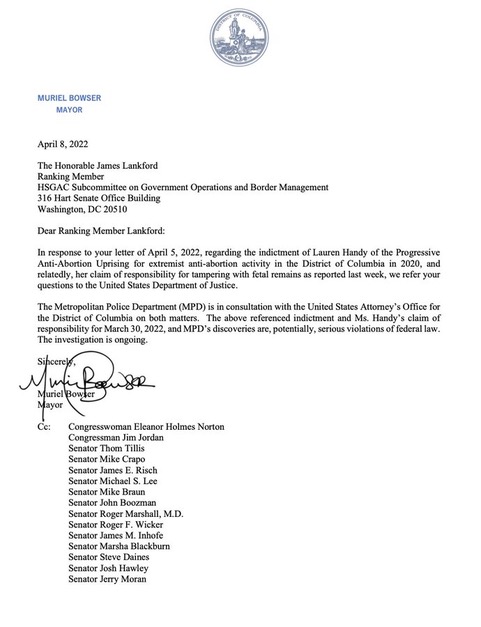 Lankford said the response tells him Bowser “thinks revealing the death of children is a crime, not taking the lives of children.”

This response tells me @MayorBowser thinks revealing the death of children is a crime, not taking the lives of children. Where are the babies? What has happened to them? Will they investigate or consider, for 1 sec, the possibility innocent lives are being taken for profit in DC? pic.twitter.com/f1xPTJWzXn

Bowser responded she was referring to the lawmakers’ questions about the indictment of Lauren Handy, the director of activism of Progressive Anti-Abortion Uprising, who reportedly took the five infant bodies to her home prior to having them turned over to the police for investigation into the U.S. Department of Justice.

The mayor said the Metropolitan Police Department is “in consultation with the United States Attorney’s Office for the District of Columbia on both matters.”

“The above referenced indictment and Ms. Handy’s claim of responsibility for March 30, 2022, and MPD’s discoveries are, potentially, serious violations of federal law,” she added, without mention of autopsies or an investigation into the abortionist. “The investigation is ongoing.”

“Where are the babies?” Lankford asked. “What has happened to them? Will they investigate or consider, for 1 sec, the possibility innocent lives are being taken for profit in DC?”

In the most recent letter to Garland, the lawmakers wrote:

Official statements made by the Metropolitan Police of DC have made the assumption that each preborn baby died as the result of a legal abortion. However, we question whether such a conclusion can be reasonably reached regarding the cause of death for each preborn baby until an official autopsy is performed. We formally request that you direct the appropriate personnel at the Department of Justice and the Federal Bureau of Investigation (FBI) to investigate whether these preborn babies were aborted in violation of federal law, specifically the Partial-Birth Abortion Ban Act of 2003. We also request the Department of Justice ensure the preservation of each of these bodies as evidence for future investigations.

“We expect that you will provide written confirmation to the undersigned that you and the appropriate personnel of the Department of Justice and the FBI will either fulfill, or not fulfill, these requests by no later than Monday, April 11,” the members of Congress wrote to the attorney general.

D.C. law enforcement has had the bodies of five fully-formed babies in their possession for more than a week while refusing to investigate. No autopsies have been performed. It is a horrendous cover-up.

“D.C. law enforcement has had the bodies of five fully-formed babies in their possession for more than a week while refusing to investigate,” pro-life leader Lila Rose of Live Action noted. “No autopsies have been performed. It is a horrendous cover-up.”