Republicans on the House Oversight and Reform Committee have obtained bombshell documents proving that Joe Biden was deeply involved in the family business of selling American natural gas to the Chinese–while he was planning to run for President. According to multiple whistleblowers, the Biden family made promises to those who worked with them in 2017 and onward that they would “reap the rewards in a future Biden administration.” These explosive revelations “pose national security concerns,” Oversight Republicans proclaimed Tuesday night.

The Biden clan enriched itself by selling the natural resources to a Chinese firm closely affiliated with the Chinese Communist Party (CCP)—just a few years before the cost of gas in the United States hit record highs, the Oversight Republicans stated.

In a letter to United States Treasury Secretary Janet Yellen, Rep. James Comer (R-Ky.), the ranking Republican on the Oversight Committee, alleged that according to whistleblowers, Joe Biden was heavily involved in this treachery.

“This comes to light at a time when the cost of natural gas is at a 14-year high and Americans struggle to pay their energy bills,” Comer wrote in the letter to Yellen. “The President has not only misled the American public about his past foreign business transactions, but he also failed to disclose that he played a critical role in arranging a business deal to sell American natural resources to the Chinese while planning to run for President.”

Comer sent a letter to Yellen in July complaining that the Treasury Department was restricting access to over 150 Suspicious Activity reports  (SARs) on Hunter Biden, amid explosive revelations that came out from Biden’s “laptop from Hell,” and iPhone.

On Sept. 2, 2022, the Treasury Department stated in a letter to Committee Republicans, that the SARs may be provided “upon a written request stating the particular information desired, the criminal, tax or regulatory purpose for which the information is sought, and the official need for the information.”

In response, Comer said that “based on the documents provided in this letter, we request all SARs from Biden family transactions, including those involving President Biden, related to transactions with Chinese entities. We are concerned that the President may have compromised national security in his dealings with the country most adverse to U.S. interests—China. These SARs will inform our analysis of this matter.”

“Jiaqi Bao, who created the presentation, was previously an employee of the CCP, and worked for Hunter Biden’s corporate entity Hudson West,” the letter states.

Comer provided Yellen with two maps that were part of a presentation emailed to Hunter Biden. The maps include sophisticated analysis written in Chinese, and show the United States carved up based on natural gas reserves “with particular emphasis on Pennsylvania, Louisiana, Texas, Oklahoma, and Wyoming.”

“The emails that accompany the transmitted maps reveal a plan to sell natural gas reserves to China via the same corporate entity branded on the presentation-Hudson West III LLC (Hudson West)–set up by Hunter Biden with officials from the Chinese company CEFC, at the time, one of the largest oil companies in China,” the letter stated. 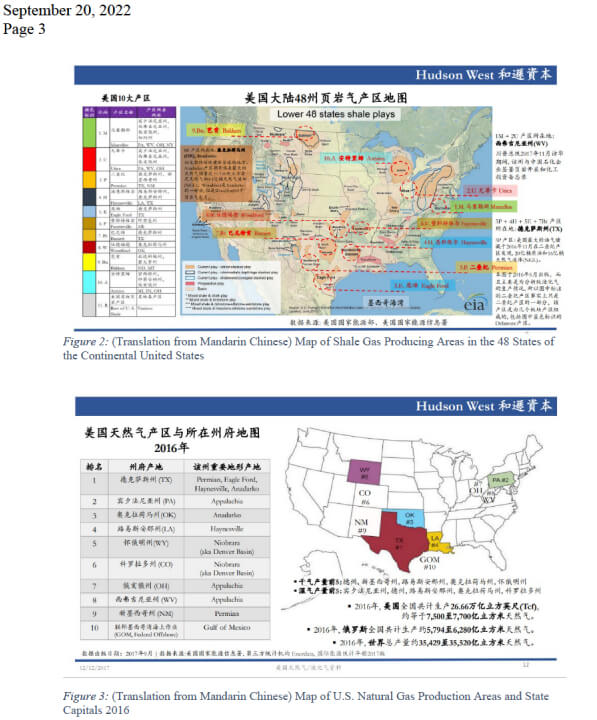 The letter goes on to note that Hunter Biden can be heard in an audio recording referring to Patrick Ho, the founder of CEFC, as the f–cking spy chief of China.”

Ho was arrested in New York in 2017 for his role in an international, multimillion-dollar bribery and money-laundering scheme that involved bribes to officials in Uganda and in Chad in exchange for business advantages for CEFC, the Communist China Energy Company at the center of allegations related to the Biden family’s corrupt business dealings.

Ho was convicted on seven federal counts related to those charges in 2018 and sentenced to three years in prison in March of 2019.

A WhatsApp exchange between business associates involved in the CEFC deal  was provided to Committee Republicans by a whistleblower, and it confirms Joe Biden’s participation in the Biden family’s influence peddling operations. On May 20, 2017, Biden associate, James Gilliar, wrote in an encrypted correspondence to another business partner: “Don’t mention Joe being involved, it’s only when [you] are face to face, I know [you] know that but they are paranoid[.]” 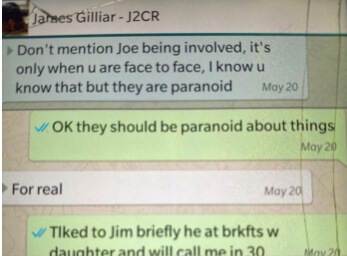 According to a whistleblower who facilitated the CEFC transaction, Joe Biden was designated an “obfuscated partner” in the business with the Chinese, and “Hunter Biden held 10 percent of the joint venture on behalf of his father to hide Joe Biden’s participation in the plan.”

All of this was done to hide from the American people that Joe Biden was aware of, involved in, and would profit from this Biden family deal with the Chinese to sell off America’s natural gas.

However, in a rush to complete a deal that had already generated millions of dollars for the Biden family, Hunter Biden appears to have made a mistake on September 21, 2017. Hunter
Biden writes in an e-mail that Joe Biden (along with James Biden, the President’s brother, and two Chinese CEFC executives) is his business partner, and provides Joe Biden’s personal cell phone if the recipient seeks confirmation (Appendix C). Then, Hunter Biden memorialized in writing that he, CEFC officials, and Joe Biden would share offices under the Hudson West CEFC name. 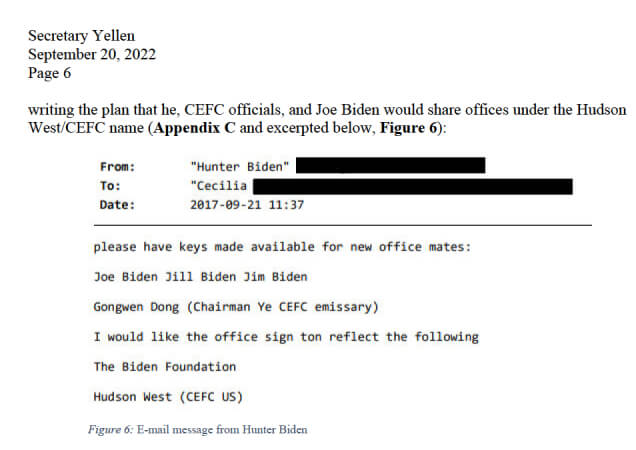 According to Comer’s letter, “multiple whistleblowers have confirmed to committee Republicans that from 2017 to 2021, the Biden family made promises to business associates that 1.) Joe Biden would run for president in 2020, and 2.) “those who worked with the Bidens in 2017 and onward would reap the rewards in a future Biden administration.”

The Kentucky Republican wrote that “as American citizens struggle in an energy crisis, it is critical  to understand why the Biden family was selling American energy reserves to the Chinese, if that is affecting President Biden’s decision making today, and why President Biden has never disclosed his relationship with the Chinese to the American public.”

Comer demanded that Yellen provide Oversight Republicans with the SARs related to the Biden family’s graft to determine the extent of Joe Biden’s involvement in selling out American interests to our adversary, China.

🚨@GOPoversight uncovered a plan by the Biden family to sell U.S. natural gas reserves to China.