Due to a projected surge in coronavirus fatalities, the state of Minnesota spent $6.9 million to acquire a warehouse for the “temporary storage of human remains,” but the facility has so far gone unused.

“What’s contemplated by the purchase is to buy a building where we can properly handle with dignity and respect and safety the bodies of Minnesotans who may fall victim to the coronavirus,” Minnesota Homeland Security and Emergency Management Director Joe Kelly said during a press conference in early May.

The funds came from the COVID-19 Minnesota Fund and the purchase was recommended for approval by Minnesota Management and Budget Commissioner Myron Frans. 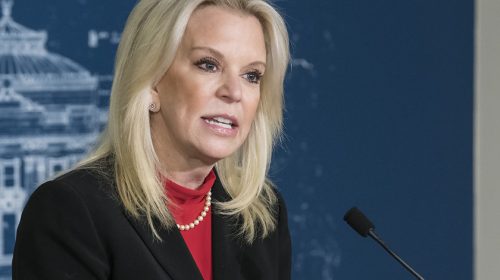 However, state Sen. Karin Housley (R-St. Mary’s Point) learned over the weekend that the $6.9 million facility has yet to be used – almost a month after it was purchased.

“No bodies have been stored to date. This facility is to serve as backup in case it is needed. Based on the experience we saw from other states, we wanted to make sure that the bodies of Minnesotans would be able to be handled with dignity and respect,” Health Commissioner Jan Malcolm told Housley in a letter.

Housley, chair of the Senate Family Care and Aging Committee, has repeatedly warned of a “major crisis” in long-term care facilities. On Thursday, she sent a list of her unanswered questions to Commissioner Malcolm and threatened to pursue a legislative subpoena if she didn’t receive a response.

“I have repeatedly asked, both privately and publicly, for specific data and information, but those requests have been met with more vague responses and promises of future emails than useful information,” said Housley.

By Friday afternoon, Housley received a 74-page response to her request for more information from Commissioner Malcolm. Among other things, Malcolm’s letter revealed that dozens of long-term care facilities have allowed COVID-19 patients to return to a congregate-care setting after being discharged from the hospital.

“I sincerely appreciate Commissioner Malcolm’s timely response to my letter. However, it’s also clear the administration should consider a more transparent approach when it comes to public disclosure,” Housley said in a statement. “I remain extremely concerned that universal testing for all facility residents and staff is not proceeding quickly enough.”

She said she plans to introduce legislation during the upcoming special session to require the Department of Health to implement widespread testing at long-term care facilities using a portion of the $1.8 billion in federal funding available to the state.

“I also remain concerned that not nearly enough personal protective equipment is being made available to long-term care facility staff and that there is not more concrete guidance for facilities to allow visitors or other services on which residents rely,” Housley added. “It has been more than three months since many of these people have been able to have visitors – and they cannot live like that forever.”

As of Sunday, Minnesota had experienced 1,186 confirmed COVID-19 deaths, 949 (80 percent) of which occurred in long-term care settings.

Malcolm’s full response to Housley can be viewed below: