One Minneapolis man has taken pains to record all reported carjackings since 2020 on an interactive map.

Resident Steve Taylor created the map on Maps.co. It gives users the coordinates where each carjacking occurred, dates and times when they occurred, and even the distance between the locations of the previous and next carjackings. 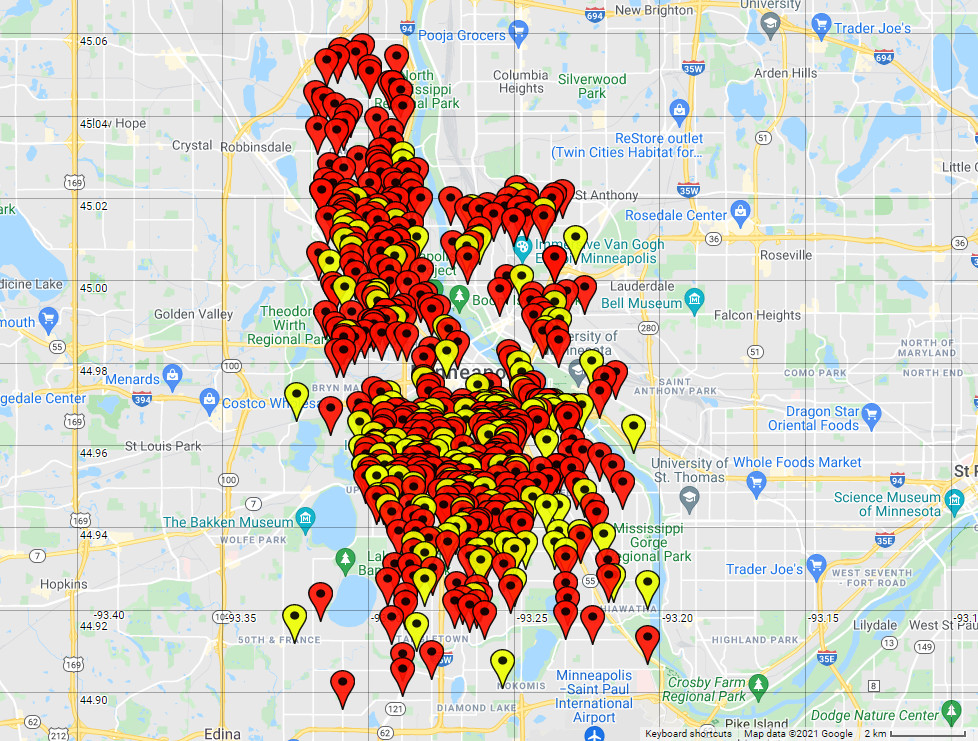 As of earlier this month, Taylor found that 492 carjackings have taken place in the city of Minneapolis since the beginning of 2021. That’s up around 40% from last year at this time, according to the Star Tribune.

“This doesn’t include car thefts, which there have been an additional 3387. Between car thefts and carjackings (robbery with car theft), there have been a total of 3879 cars taken, almost 1% of the population of Minneapolis have had their car taken in 2021, and 4035 car thefts/carjackings in 2020,” he wrote in a post to Uptown Crime, a Facebook group he runs.

The carjacking epidemic has gotten so out of hand that Uber and Lyft drivers have been noticeably targeted for robberies and car thefts. Some of the incidents occur in bunches. On October 17, for instance, three separate rideshare carjackings occurred within a 50-minute span from 10:40 to 11:30 p.m.

Although Minneapolis is bearing the brunt of the state’s carjackings, the issue has spilled over into the suburbs. Twin Cities police officers have recently cautioned suburban residents to be mindful of the potential for carjackings, even in reliably safe areas.

“Last week, two young teenage boys held a woman at gunpoint as she exited Xperience Fitness club near 1650 County Road B2 in Roseville. They stole her Jeep Grand Cherokee. About one hour later, the vehicle was pursued into St. Paul by police. The chase ended with three boys ages 13, 14 and 15 as well as two girls ages 13 and 14 in custody, Ramsey County Sheriff Bob Fletcher told local media,” reported Alpha News earlier this month.

“Another Roseville woman was victimized in a similar fashion, but her attacker struck her in the head with a gun, leaving her badly cut,” said Roseville Deputy Police Chief Joe Adams.

Evan Stambaugh is a freelance writer who had previously been a sports blogger. He has a BA in theology and an MA in philosophy. In 2016 he was a volunteer, intern, and field assistant for Donald Trump’s successful presidential campaign.